Eintracht Frankfurt played well comparatively but 20 minute goal by French midfielder Frank Ribery change the result of the match. The team of reds is close to taste another title trophy of Bundesliga. They are not worry about this competition at all but they are always trusty to get win. Main target of Bayern is to win the title of Champions League right now. It was required for BMH to score more goal against Frankfurt to good practice of goal. However, win is important for a big team and that did Der FCB perfectly.

Highlights video of the match …

No. #1 club of German Bundesliga FC Bayern Munich going win just another title. Only team Borussia Dortmund is competing with Der FCB right now. Every clubs played 27 matches in total and Bayern collected 69 matches in total. There is no one to stop the team of Philipp Lahm cause of more in form striker of them. Eintracht Frankfurt surprised it’s audiences by passing a worse season in 2015-16. Won in only 6 matches still now, standing on 17th No. Right now to play next year Bundesliga tournament is the only target for this club of Germany. 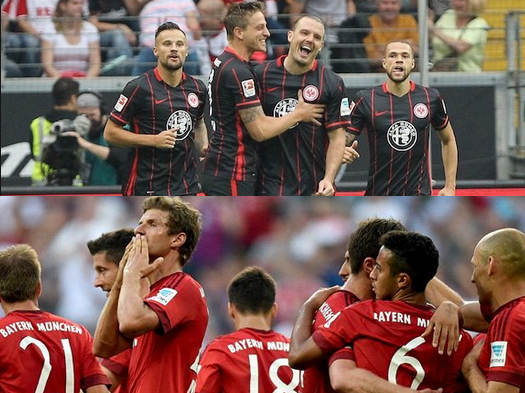 Die Adler would destroy by Der FCB in this day as this match going to held in the reds home ground. Though playing attitude of both club is same and that’s why it’s won’t be an easy task for the Muller, Lewandowski, Rooben to score more. Good decision for Eintracht would be play defensive football to stop opponents. Lacking for this 17th ranking team of Bundesliga is their goal scoring capacity. But if some how they can score a goal early and play defensive then result should be different.

Every matches of Bayern give more entertainment cause of more goal during the match and it would just another event like that as well.