Though Portuguese team didn’t play well in past couple of year including FIFA world cup 2014 but their current team is more balanced where having chance to show down something exceptional from the beginning of the tournament. Result of the match is well enough to understand the performance of both team. As like goal draw, their aggregation, corner, skills were bit same. Uncertain matter can be happen within 3 minute of the game by Iceland. Ronaldo’s excellent cross was an easy head for Nani to score first goal but goalkeeper save nicely. CR7’s 23 minute head was an outstanding effort but little bit over the goal post. Finally, goal came from Nani on 31 minute. 50′ goal by Bjarnason change the scenario of the game by 1 – 1 draw. Lot of effort done by Red-greens but it was not enough.

15th edition of UEFA European Championship has started from 10th June, 2016 and it will end up in next 10th July, 2016. Total twenty four teams will compete here where they are divided into six groups. Total fifty one (51) matches will be played in ten different venues in France. It is the third times for France to host this UEFA Euro event which is considered the world’s 2nd largest football competition nowadays after FIFA World Cup. Spain and Germany are the most successful teams in UEFA Euro where both of them won three titles of the Euro each. The current champion is Spain. 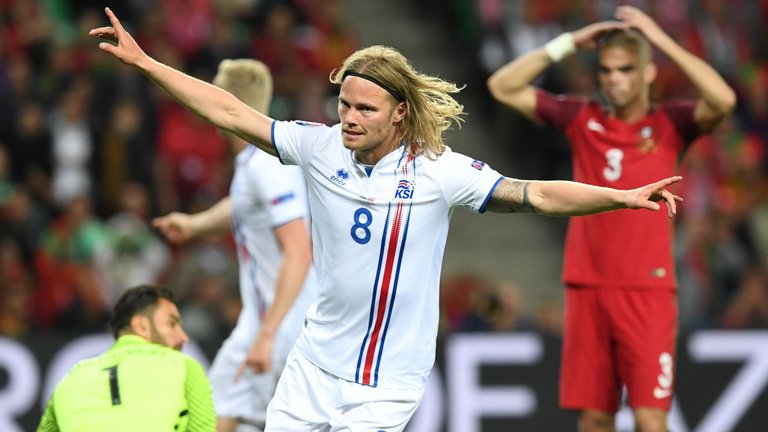 # Preview: Team POR and ICE will play against each other in next 14th June, 2016 where both of them are placed in group F and it will be the 12th match of UEFA Euro 2016. This match will be staged at Stade Geoffroy Guichard which is located in Saint Etienne, Loire, France. This field with grass surfacing and 42,000 seats capacity. It was established in 13th September, 1931. Turkish Cuneyt Cakir will be the referee in this match.

# Head To Head: Portuguese national team played with Icelanders only two times before and they won both twice times. Iceland did not worthy enough to win or draw a match. So, it will be their 3rd match which should be challenging. It will be both of their first match where they are scheduled to play total three matches in group stage of UEFA Euro 2016. Each group contains four teams. The rest two team mates of Portugal and Iceland are Austria and Hungary.

# Teams Lineups: The Seleccao’s has some talented players with their playing formation 4 – 3 – 3. Cristiano Ronaldo is their current skipper and also considered the winning trump card. Besides, Ricardo Quaresma will probably play their next match against Iceland. Rui Patricio will play as their main goalkeeper.

Iceland team is very forceful. They used to follow 4 – 5 – 1 formation in field.