Ligue 1 Champion destroyed Premier League Champions by 4 – 0. It was a big match to watching on and English fans eagerly waited to see another high level performance of the foxes. They have Riyad Mahrez but Vardey was out of squad. It should be a competitive game where Parisian give no time to the defending champions of EPL. First goal came from Penalty shootout which is successfully done by Edinson Cavani. 45th minute goal of young star Nanitamo Ikone keep ahead the PSG by 2 – 0. 2nd half was the enough chance for Leicester to come back into the game but they are failed.  Lucas Moura‘s 64 minute goal made the city hopeless. Odsonne Edouard‘s 90 minute goal made big difference and ended the match with goal flood.

French giant Paris Saint Germain or PSG is ranked in number #1 in Ligue 1 point table and also has taken part in 4th edition of International Champions Cup. They have already played their first match in this tournament and now are going to meet the current Premier League champion Leicester City. Both teams have played their first match in ICC 2016 and now scheduled to fight against each other for the first time in history. 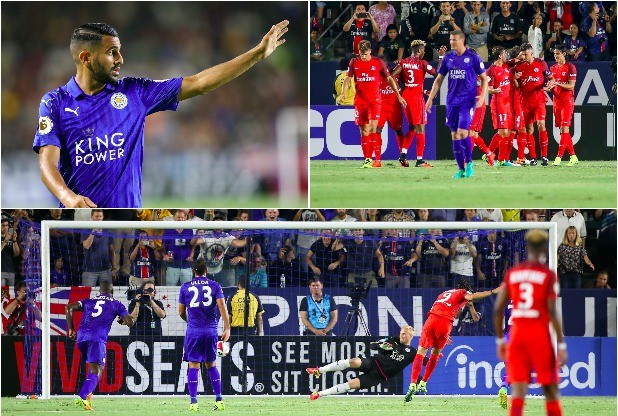 # Head To Head Statistics: Paris SG and the Foxes did not fight against each other before. So, their inaugural fight will be contesting.

# Key Players of the Parisians: The Parisians have some most fearsome players which team is led by Brazilian Thiago Silva. In their last match against Real Madrid, they have shown some extraordinary performances. As a result, they was able to defeat them by 3 – 1 goals. Their player Meunier scored a pair of goals where Ikone scored one goal. Besides, Argentine legendary playmaker Di Maria is in their best eleven and obviously Uruguayan striker Cavani will lead them in field.

# Key Players of the Foxes: The Foxes are the current champion of the Premier League which proved them one of the top contender in running ICC. They are fully matured team. This team is led by Jamaican Wes Morgan. They have some renowned defender and midfielder in their current squad. Algerian playmaker Riyad Mahrez would be their trump card in their next match. They have also won their only played match in this tournament against Celtic by penalty shoot out. Mahrez played the most important role in that match.

# Prediction: Though, Leicester City is the defending champion of EPL but according to their playing style, we are favouring the Parisians most. So, the prediction is – Paris SG 3 – 1 Leicester City.