Big match half time finished with more goals. Just when match referee ring the whistle, scoreboard were Man U 2 – 1 Arsenal. In form forward of Manchester United Marcus Rashford again score pair goal as like the match of Europa league. 2 goals just within 3 minutes simply made frustration of Arsenal team. Again English footballer scored goal for Arsenal, it was Danny Wellbeck. As usually this kind of big match of English Premier League finished with more goals which also happen in this match. Spanish footballer Ander Herrera again keep ahead red devils by 3 – 1. German Arsenal midfielder reduce the difference but it was not enough. Finally Man U won the match and Arsenal fall in under pressure.

Home ground of Manchester United “Old Trafford” is ready to welcome the biggest match of English Premier League between most time title winner Man Utd and favourite of this season Arsenal. This Arsenal Vs Manchester united match held on 28th february, 2016 at 2:05 pm (BST). Every ticket of this match is sold out around 2 month ago. After the good performance against Danish club FC Midtjylland, team Man U was more confident. In this Europa league match 2nd leg, red devils won by 5 – 1 goal and set next round against English giant FC Liverpool. On the other hand, Arsenal is very close to out of the competition from UEFA Champions League. Their 1st leg losing against FC Barcelona by 2 – 0 was definitely a shock for them.

From the beginning of this season, Arsenal always keep ahead them in point table and kept opportunity to win the title. Right now they are standing on 3rd position after Leicester city & Tottenham Hotspur. Arsenal is only 2 point far from the 1st position team Leicester city. Still twelve match in hand and big English giants have opportunity to defeat Tottenham and Leicester city FC in point table. English No. #1 popular club Man U can’t proof them as the favourite still now. Though bad performance of Champions League, losing against mid level clubs made frustrated to it’s fans.

As like other matches, Arsenal would play with their best XI by keeping Giroud, Sanchez, Ozil & Oxlade in forward. Lack of goal making capacity of Arsenal strikers can affect this match result against Man U. Last match lineups, without Wayne Rooney was not affected the performance of Manchester Utd and 5 goal scoring practice can keep ahead red devils in this biggest event.

On the basis of last matches performance, we should keep ahead Man U but regular based performance of Arsenal always considerable. Most of the media wrote down their prediction as 1 – 1 or, 2 – 2 draw but we are giving priority to the last match performance and according to the editorial prediction of Sports Maza, it would be Manchester united 3 – 2 Arsenal.
4 October, 2015 where Man U lost by 3 – 0 … 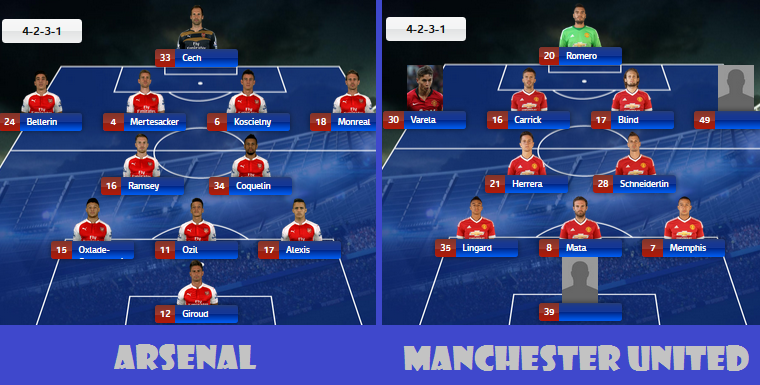 Bad news for Man U is their icon forward is going to miss this big match cause of injury where Louis van Gaal elected to keep young star Marcus Rashford who scored pair goal into the last Europa league match.