Absolutely tremendous performance by Monaco in front of the Champions of 2016-17 Paris Saint Germain. Though it was too late for Monaco as PSG already won the title of Ligue 1 in this season but this kind of win will mentally support Monaco to do well in rest of the matches. Half time of this game finished with goal zero draw and it’s looked Paris SG isn’t took this match seriously. First goal for the Whites and red scored by Vagner Love on 65 minute. 2nd goal was the bonus score for them by Penalty shoot. Within next 3 minute of the first goal Fabinho did his job perfectly by his clever Penalty shootout.

1st and 2nd team of French Ligue 1 standing point table will play against them on 20 March, 2016 at Parc des Princes. Though Paris Saint Germain already won this year 2015-16 title by playing only 29 matches. 2nd club Monaco is still 25 point far from this No. #1 soccer team of Paris. The team of Zlatan Ibrahimovic made goal flood in their last match against Troyes where they scored 9 goals in total which is the biggest win of this season in Ligue 1 as well. Another success of PSG is the win against English leading club Chelsea in round of last 16. This french club is also mentioning as the possible favourite of UEFA Champions League as well.

Monaco don’t have any chance to win the title but it would be a great opportunity for the red and whites to proof them against the leading club of France. 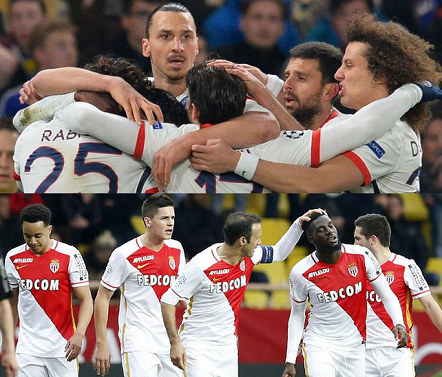 Paris SG played 30 matches in total in Ligue 1 where lost in only 1 match against Lyon, drawn 5, won rest of 24 matches and made the point total 77. On the other hand, Monaco faced same amount of match where won in 13 only which made their total 52 only.

Paris Saint Germain manager Laurent Robert Blanc is very careful about club transfer. They bought a couple of skilled footballer in last few years as like Angel Di Maria, Javier Pastore etc. Defense of this french club mentioned as one of the best defense of this time cause of most experienced superstar defender of them where they have Thiago Silva, David Luiz & Van Der Wiel. Though the mid-fielders can’t proved them as the icon still now but their forward section is extremely outstanding. Swedish striker Zlatan Ibrahimovic in form and goal machine of them. Uruguayan Edinson Cavani and Argentine attacking mid-fielder Di Maria contributing a lot for PSG.

Scenario of Monaco isn’t like the previous years, after the transfer of James Rodriguez to Real Madrid, the red and whites match winning records become low. Though their 2nd position in 2015-16 season still a good signal for them but Nice, Lyon & Rennes point total is close to them.

Prediction of this match definitely favour the team of Laurent Blanc cause of more renowned footballers of them. Result of this match would PSG 3 – 1 Monaco.