Swedish goal machine of the Parisians Zlatan ibrahimovic scored hat-trick into the 32nd match which was against OGC Nice. Though PSG didn’t need any win into this tournament as they already ensure trophy. But every game taking Paris Saint Germain very seriously. Zlatan Ibrahimovic is the trump card for PSG for any matches. In this match first goal also done by this Swedish forward. But Ben Arfa made the score level within next 3 minute. 34′ goal by Zlatan made the score 2 – 1 and half time finished with this result. David luiz make another difference just starting of the 2nd half. Finishing goal made by Ibrahimovic on 84 minute and did hat-trick.

Highlights of all goals of PSG Vs Nice match –

Only club still now of this season those won national league title by left 8 matches. Paris Saint Germain winning Ligue 1 trophy again and again. From couple of season, they are investing more money to hire professionals and right now performing in UEFA Champions League as well. No one competitor available of PSG in Franc right now surely. 2nd position team Monaco is 22 point far from the Parisians. OGC Nice played extremely well during this season comparing previous years and standing on 3rd position. That’s why having opportunity to qualify for next season UCL tournament. But Lyon, Rennes & Caen is very close to them. This match is a tough challenge for Nice to keep their ranking on right position. 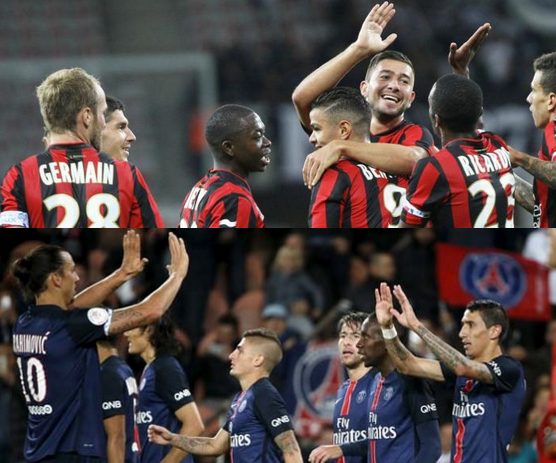 Prediction of this match is little bit easy cause of straight winning records of Paris Saint Germain in this season. OGC Nice will tried hard and soul to defeat the Parisians cause of their ranking position. The team of Laurent Blanc won’t want to lose a match before Champions League. But we are hopeful that Nice will play good football in this match.