Austrian club R. Wien shocked the blue lions into the first warm up match of the season. After a very bad Premier League season, it was expected to watch a great come back by this leading English club. Another important part of tonight was, they played under Conte who is the most successful manager for national team. However, it was a bad day for the blues as well. Lots of attempts saved by the Wien’s goalkeeper and goal post bar became the enemy today. Within 7 minute goal by Apolinario de Lira shown the quality of football by this Austrian club. Finally Correa Miranda’s 82 minute goal ensure victory for Rapid Wien. 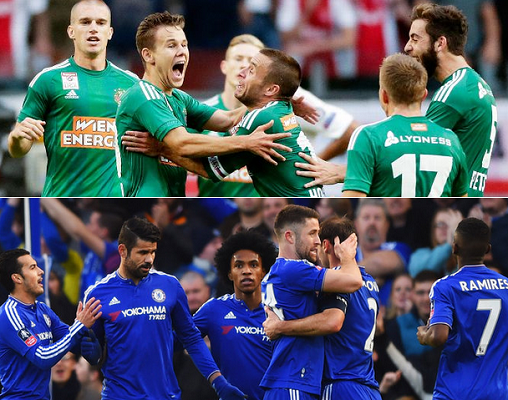 Chelsea are going to be commenced their pre-tour season friendly match from 16th July, Saturday in Austria. The match will be played against Rapid Vienna which also known as Sportklub Rapid Wien. After finishing premier league 2015-16 campaign the English Club Chelsea going to play their first friendly under the new coach Antonio Conte.  Their last game against Leicester City, which result obtained as draw by 1-1 score, make the club position on 10th of the season. On the other hand the most successful Austrian club Rapid Wien also in form to warm up the match.

The both side had not met with each other in past and this is the first war of two team which schedule confirmed at Allianz Stadion. The last matches result of Chelsea is not so well, they got only two win out of ten and the majority of the last matches result being drawn and lost. After ending the season they cut figure the veteran coach Jose Mourinho and appointed the new one. Though the match is not the part of any major competition but it becomes the most challenging game to both team. The both team are hopeful for the match and desperate to grab the first friendlies. The match information has given below with the possible eleven of both side.

Nick name: The Blues, The Pensioners