Match against Rayo Vallecano means goal flood from Wales forward Gareth Bale who scored 4 goal himself into the last match against Rayo. Today’s performance of him was closely same. His pair goal saved Real Madrid to keep alive their dream in La Liga. Embarba & Miku’s 7′ & 14′ goal was a great shock for the Galacticos but they didn’t frustrated and started to attack more. Gareth Bale’s 35 minute goal support the team of BBC to finish half time by 1 – 2. Lucas 52′ goal was basic need for them as well. But still one goal they needed to win the match. 81 minute goal of Bale was the heart breaking for the Rayo Vallecano.

Highlights of the match –

Right now Spanish Premier BBVA title winning prediction become more tough cause of heavy performance of Real Madrid. Though FCB was very close to win the title but their worse performance simply damage their strength. Though the Blaugranes “U” turn into their last match by won over Deportivo by 8 – 0. Right now the team of BBC is 1 point far from 1st & 2nd position Barcelona & Atletico Madrid. Very tight situation but interesting situation happening in La Liga right now. Who will win the title this year, is really a big question mark. Every teams need to win rest of the matches to ensure title. 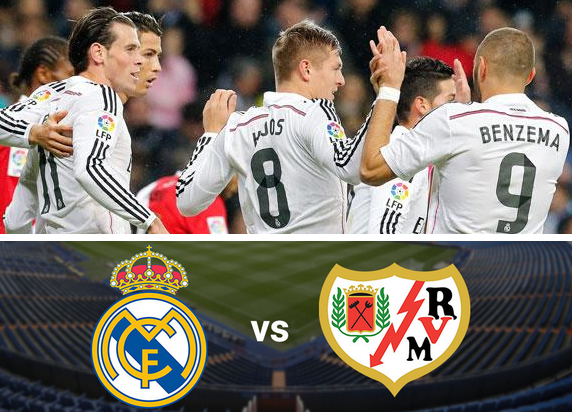 Today, Galacticos will face 16th rank Rayo Vallecano where they need an urgent win to keep alive their title winning opportunity. Good sign for the BBC that they won in last 4 matches by good difference. Rest of their matches in La Liga against normal teams except Valencia where the Galacticos need to provide an exam.

Usually, La Liga leading teams statistics isn’t like English Premier League as their top teams past H2h statistics against middle order teams is same together. If the team of Zinedine Zidane lose this match against Rayo, that will be mentioned as co-incidence surely. This two club last met in December, 2015 where the Galacticos destroyed the team Vallecano by 10 – 2. Into that match Bale & Benzema scored hat-trick as well.

Total twelve goals match where the most time Champions league winners made 10 goals. Gareth Bale also scored four goal for his team. Though the Galacticos fall in pressure in first time when Rayo scored 2 goal and they have a goal only. Danilo was the goal opener of Real’s side, he scored after three minutes from match starting but Amaya scored a goal for Rayo when the match life was ten minutes and Jozabed scored another after two minutes from Amaya.

Rayo had a big chance to won that match but they lost their two players in first half. Jozabed and Baena both out from pitch for showing red card. Jozabed shown red card when match was in 14 minutes and Baena shown 28 minutes of match. They both have done two big foul in his match.

Gareth Bale scored in 25, 41, 61 and 70 minutes and Karim Benzema was scored in 48, 79, 90 minutes. Cristiano Ronaldo also scored two and Danilo also scored one for them.

This is also big victory for Real Madrid and they are now stands in third position in La Liga league table and also one points bottom then Barcelona. The galaticos also missed out their record victory for a goal, their height victory record was in 1943 against Barcelona by 11-1 goal.

Hopefully, another big difference would be happen tonight as Real Madrid is in under pressure.