Alvaro Morata guided Spanish team by scoring two goal for this nation and it’s helps them to earn more 3 points to stand on top position in their group. Another goal for Spanish side scored by Nolito which ensure 3 – 0 win for them over Turkish national team.

15th edition of 2nd largest football competition UEFA Euro 2016 has started again from 10th June, 2016. Total Twenty four (24) teams have participated here where team Spain is one of the two most successful team which won the most prestigious title three times. They are also the defending champion of the Euro 2016. Team Spain and Turkey are scheduled to play their next match against each other in upcoming 17th June, 2016 where they are both placed in group D with Czech Republic and Croatia. It will be their 2nd match of the group stage where in the 1st match, Spain defeated Czech Republic by 1 – 0 goal and Turkey was defeated by Croatia by scoring 0 – 1 goal. So, If Spain will win their next match against Turkey, they will qualify for the next round. One the other hand, whereas Turkey lost their first match and so they need to win rest two matches to qualify. Which why, they are desperate to win. But they also know, it will be not easy to defeat Spain because they are full of talented players. But, they have none other way. 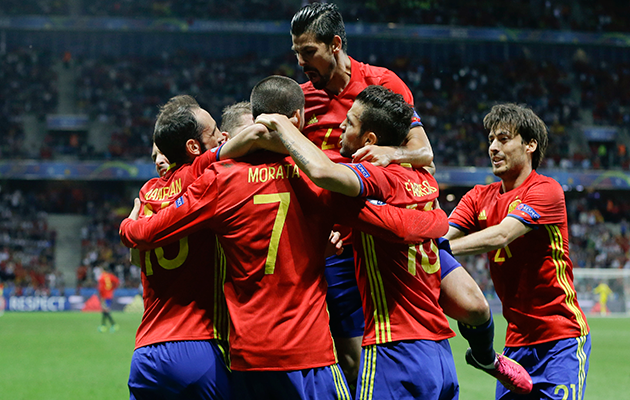 # Preview: The Red Fury will play their next match in UEFA Euro 2016 against Turkey in next 17th June, 2016 which will be the 21st match of the tournament. The match will be staged at Allianz Riviera which is situated in Nice, France. City of Nice is the owner of this stadium. It has 35,624 seats capacity. This is the multi use stadium in Nice, France which was opened in September, 2013. Serbian Milorad Mazic will be the main referee in the match between the Red and Turkish.

# Head To Head: Till now, the Fury played with Turkey eleven (11) times totally where the Red Fury won five (5) and they lost twice. Rest four matches were drawn by them.

According to their statistics, Spain has possible chance to win and also they are in good form. As stated by their last five matches, they won three and drawn one. On the other hand, Turkish team won also three and lost two. But Turkey has lack of experienced players that would suffer them.

# Teams Lineups: Led by Iker Casillas, team Spain used to play with their 4 – 3 – 3 attacking style. They have some great players like Sergio Ramos, Juanfran, Marc Barta, Gerard Pique, Sergio Busquets, Andres Iniesta and so on. They are all played for the renowned different clubs in worldwide. On the other hand, Turkish team used to play defensive football. Their formation is 4 – 5 – 1. Their team is led by Arda Turan who used to play for Spanish giant Barcelona as a midfielder.

# Prediction: According to the possible strength and attacking style, the Fury would possibly destroy the defense of Turkey. It takes maximum chance that Spain will win. So, the prediction is – Spain 2 – 0 Turkey.