Sergio Aguero scored hat-trick after missing 2 penalty shootout in a row. It seems Argentine players in panic after losing few big matches for the national team in Tie-breaker. But his goals guide the Citizens to ensure victory against Romanian club Steaua Bucuresti by 5 – 0.

Goals Highlights of this match …

Pep Guardiola is very satisfied after winning the match of UEFA Champions League qualifying round. Though Bucuresti isn’t a considerable team in front of the Citizens but it’s need to understand that this Romanian club came to this stage by performing good football in their national team. Even, few of specialists though that Bucharest would something unpredictable thing into this UCLQ match against the Citizens.

First goal came from Spanish star David Silva just on 13 minute and it was easy to understand after this goal that Guardiola’s team is going to get a big victory over this Romanian club. Just before the half time, another goal came from Aguero’s leg on 41 minute. Spanish left wing Nolito scored just into the beginning of the last half on 49′. After missing Penalty, Argentine man was in deep pressure but tried to overcome his performance by scoring more goal and he become succeed on 78′ & 89′. 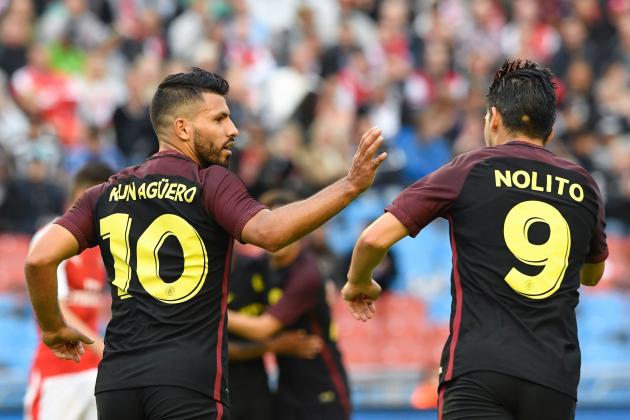 As Bucharest if the capital of Romania and this match held on their national team called National arena, huge audience attain into this match which total was 45,327. This is kind attendance in this type of match was highly encourage-able.

This match result simply mentioning the qualification of the Citizens finally for the journey of Champions League. Definitely, it’s a great news for English fans as well that one of their clubs joining in UCL 2016-17 as like what happen in every year.

Cause of below 3 performance of Man city into the Premier League 2015-16 season. They need to play in qualifying round but as usually the 4th and 5th team successfully qualified from this round from England in every year. Though UEFA picked by co-efficient No. and made the quota but it’s seems, UEFA should give more chance to Spanish, English, Italian & German clubs, as they usually doing well in this kind of stages.

Pep Guardiola’s team also get win into their first match against Sunderland but having a good luck into the game. As their next match against Stoke city, should become very aware as this team performed well in the year 2015-16.