Another losing moment of Chelsea into the finishing moment of the season against Swansea city. Only goal of the match scored by Gylfi Sigurdsson on 25 minute. The Blue lions tried to give back the goal to come back into the match by give back goal but can’t able to make a single goal. Though this match result can’t hamper their position in table ranking but after playing 32 match, this kind of 10th ranking is extremely a shocking news for it’s fans. This helped the jacks to come in 12th position and made opportunity to finish this season nicely.

Swansea City Vs Chelsea EPL match telecasting on SuperSport, SportsMax, DIGI Sport 1, ESPN in 9 April 2016 at Villa Park stadium. The Swans won their last match against Aston Villa where Federico Fernandez was the scorer of that match but Bafetimbi Gomis have to take some responsibility for this match because Chelsea is one of the most strong team in EPL. In league table the blue lions in No. 10 position where the Swans in No: 15. The Blues don’t want to lose this match because if they win this match they will join with Liverpool in league table with 44 points. On the other hand the Swans are looking for improve their ranking on league table. 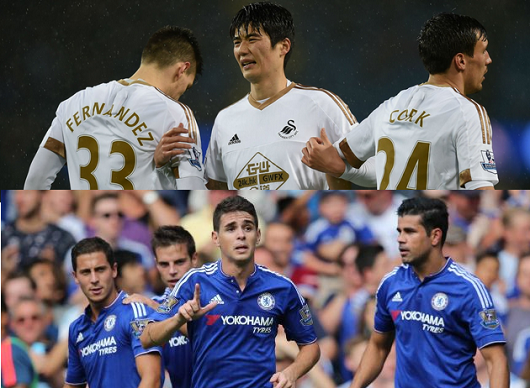 Match between: Chelsea Vs Swansea city

Into the last season the Jacks played couple of good matches and proved them a qualitative team to play in English Premier league. This season performance of them was not bad as well into the starting of the season. They should ensure their next tournament qualifying chance right now. The defending champions are crazy about to win and keep ahead their ranking to ensure a good finish of this season.