Best Lineup of Germany participated into this beginning match and they are outstanding in this night as well. First goal for the nation on UEFA Euro scored by Valencia defender Shkodran Mustafi on 19′. It was a fantastic cross Arsenal superstar Ozil. Excellent head and finish by Mustafi which made the score 1 – 0. Same kind of opportunity made by Ukraine by Manuel Neuer performed his task as the world #1 goal keeper. No goal scored in next 74 minute but the captain Bastian Schweinsteiger came in before the finish of the game and made the scorecard 2 – 0 in extra time (92′).

FIFA world cup 2018 Champion Germany mentioning as the 2nd most favourite team of this tournament after the host nation France. If we consider the performance & skill, must need to keep German team in No. #1 cause of their discipline, fast & attacking football style. 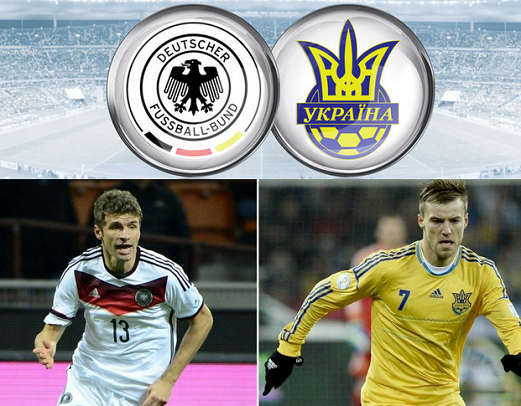 Germany don’t have any footballer like Lionel Messi Or, Cristiano Ronaldo but everyone of them is star. Most productive part of their game is, their team combination. Actually, they don’t need any icon but believe in team based performance.

As like every matches, German team made opportunity to score goal from starting moment of the match. Long & fast ball pass of this team fascinated every audiences of the gallery. It was highly exciting to watch the skill of Thomas Muller, Ozil, Kross & Khedira. Excellent midfield and balanced forwards sweated Ukraine defenders a lot. Though couple of shots in target saved by Andriy Pyatov and few cross can’t successfully finished by German strikers.

Ukraine was the frustrated at all in front of the champions cause of their confident & experience. Match aggregation, statistics was German team side but few of attack by the Yellow, blue men feared billion of supporters of Germany. Maual Neuer’s defense guideline and skill, also saved them 2 – 3 times.

Still now the team of Mykhaylo Fomenko, don’t have any record to win over 4 times world winners. On the other hand, few years performance of Ukrainian team isn’t like the past time. After the retirement of their legend footballer Andriy Shevchenko, this team loss the originality of them. Into the last year, they can’t qualify for the world cup as well. To play in this biggest tournament of Europe is also just another achievement for this nation.