Into the last Copa America, Argentina lost against host nation Chile in penalty shootout. That’s why the team of Lionel Messi was much more serious against USMNT. Finally, expected result come in from Argentine side. Totally 4 goal destroyed the dream of US fans. 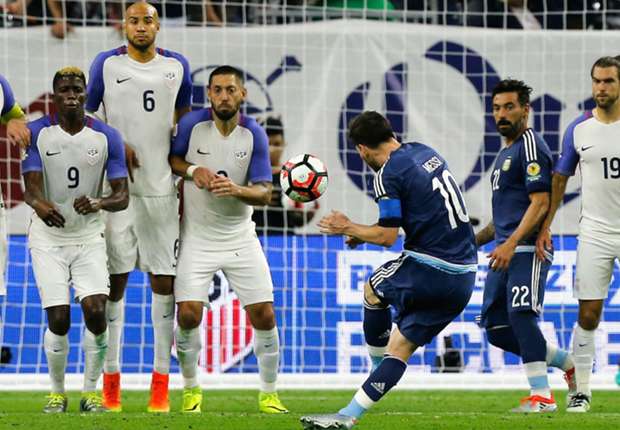 As it’s knockout stage, Sky blue team was much more aggressive to score goal from the starting of the match and that’s why made attempts over and over again. Success come in within 2 minute of the game by a head of Ezequiel Lavezzi. More shots in target came from Messi & Higuain’s foot. Into the 31 minute of the game, Leo Messi got chance to make a free kick. It looks, this man was much more serious to take this shootout and fans thought it can be a goal. Excellent target by Messi once again above the head of US footballer and cross goalkeeper by very close turn of goal post. It should be call the best goal of this tournament as well. More goal can be come from Messi’s attempts but the US goalkeeper Tim Howard was very careful about him. Into the 2nd half, Messi made two assist and goal scored by Napoli’s Serie A top scorer of the last season Gonzalo Higuain.

To win a trophy for national team is very important for the current legend of Argentine team Leo Messi. Another chance come in once again. After FIFA world cup 2014 & Copa America 2015, 3rd attempt by this team to play final match of any biggest tournament. This time, coach Gerardo Martino is much more careful about to score more goal within 120 minute of the game. Possibly, they need to face Chile once again into the final. Into the last two game, the team of Sanchez lost against 2 time world cup winner without Lionel Messi into the squad. It would be 3rd time revenge chance for the team Argentine.

After this 1st Semifinal match, Messi’s total goal become 5 just after Eduardo Vargas. But he made 4 assist in total which can be help him to win the golden ball once again. Gonzalo Higuain also in 3rd position in golden boot race. Though they are not seeking about boot but the title.

Bad luck for USA Soccer team surely. It was the biggest match of their soccer history surely. Also having chance to do something special in own ground but lack of defending skill sank them into the Semifinal. However, it’s a great tournament for them as well which can be encourage them to go ahead in next days.