Though it was against small team, but every knockout stage match surely heart beating for fans. However, Argentina team successfully won into their quarterfinal match by 4 – 1. Gonzalo Higuain scored 2 goal into the beginning of the match where Messi assist one of them. Rest of two goal done by Messi himself & Erik Lamela.

Watch Highlights of this match …

Argentina is current the world’s top ranked team which has competed in the centennial event of Copa America 2016. Though, in 2015 Copa America was placed in Chile and it generally held every after four years but this year it has started again because it is a celebration of completing hundred years of CA. So, it is a special edition this time which is arranged by CONMEBOL and CONCACAF jointly. 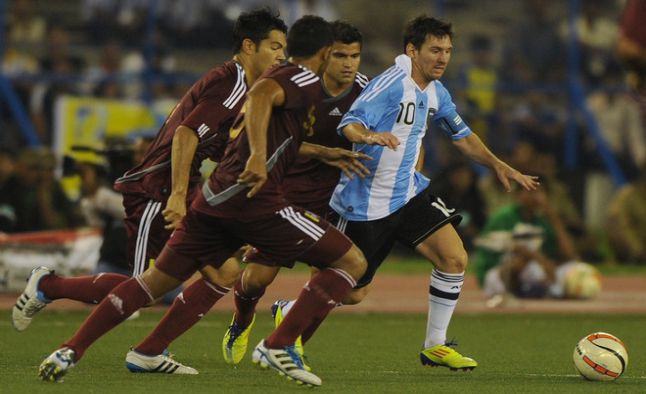 Team Argentina is one of the sixteen participants where the participants number are extended from twelve to sixteen due to a special edition of CA. So, 45th edition of CA has run from 3rd June, 2016 and now the group stage matches have almost over. Eight teams are qualified for quarter final among sixteen where Argentina and Venezuela are two of them. The 1st and 2nd quarter final match have finished where host United States has defeated Ecuador and Colombia has defeated Peru. Now the time has come for 3rd quarter final which will be played between Argentina and Venezuela. The winner of the team will proceed to the next semi final round.

The White and Sky Blue has reached quarter final as a group champion and they have scored the highest goals in group stage matches in Copa America ever.

On the other hand, team Venezuela has qualified as a group runner up. They have won two matches and rest one is drawn in group stage but no lose. So, they seem to be the tough opponent in quarter final for Argentina.

# Preview: Argentina and Venezuela will play their next match which will be the 3rd quarter final in Copa America Centenario in next 18th June, 2016 at Patriot Place, Foxborough, Massachusetts 02035, USA. This ground was previously known as CMGI Field. Kraft Sports Group is the current owner of this ground. It has 66,829 seats capacity with 87 exclusive suites. The surface is FieldTurf. It was opened in 9th September, 2002. Mexican Roberto Garcia Orozco will be the referee in this historical match. It will be the 27th match of this south America biggest football competition.

# Teams Lineups: Argentina used to play with their famous 4 – 2 – 3 – 1 formation. Lionel Messi who is the current skipper of Argentine team would have maximum chance to lead the attacking side. Sergio Aguero and Higuain would be the two winger of this team. Banega, Di Maria and Mascherano would play their next biggest match. Romero will be their regular goalkeeper in upcoming match.

The Burgundy is led by Tomas Rincon. They used to play defensive football which would be the main problem for Argentina. Their playing formation is 4 – 4 – 2. Santos and Del Valle would possibly be their main attacker in upcoming match.

# Prediction: Argentina is the always favourite in next match as well as CA Centenario 2016. So, would probably play with their own style. According to the playmaker of Argentine team Mascherano that they will not receive extra load in their next match. They are desperate to give their best. So, the prediction is – Argentina 3 – 0 Venezuela.