Finally the big game finished with 2 – 1 and favor favourites. It was not only a game of qualifying for the quarter-final but also a game to raise up football history between two UK’s nation. English team forced Wales defense from the beginning of the match and few of attempts was very close to become goal. Score can be 2 – 0 for English side within 1st half as well. Suddenly the break throw made by the legend of Wales Gareth Bale which was the most expected goal of this match. Half time finished with WAL 1 – 0 ENG. English team fall in trouble and this time Roy Hodgson felt the importance of Leicester city Premier League title winner striker Jamie Vardy and within few minutes, he proof himself and made the score level. 90′ + 1 extra time goal by Sturridge make sure the victory for red-whites.

Extended Highlights video of this match …

The second largest football competition in the world, UEFA Euro has started again which is 15th edition of the Euro and there around twenty-four participants have joined. Among them, England and Wale are placed in group B including Slovakia and Russia where each group contains four teams and each team is scheduled to play against three matches against three group members in group stage. All matches of the tournament will be hosted in France this time. 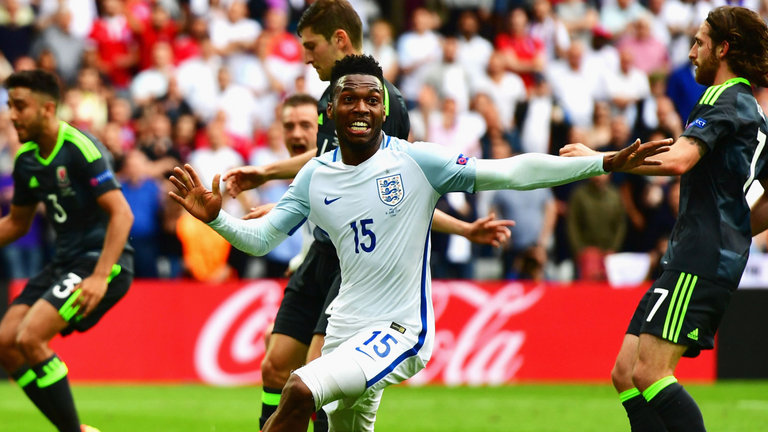 England and Wales have already played their first match in the Euro 2016 where England has drawn against Russia by 1 – 1 and Wales has won against Slovakia by 2 – 1 goals. Now, this both two teams are scheduled to play their next match against each other where English team are desperate to win because if they do, they might have chance to qualify to the next round and Wales are ready to give their best because if they will win, they will proceed to the knockout phase.

# Preview: English team and Wales will play against each other in next 16th June, 2016 in running UEFA Euro 2016. It will be the 16th match of the tournament which will be staged at Stade Bollaert Delelis in Lens, France. It is one of the main football stadium in France which was founded in 1933. It has 38,223 seats capacity. German Felix Brych will be the main referee of this match.

# Head To Head: English national football team which is also called The Three Lions totally played with The Dragons (Nickname of Wales) 101 times where The Three Lions won 66 times and 21 matches were drawn. Rest 14 matches were won by The Dragon. In 6th September, 2011, They last met where English team defeated them by 1 – 0.

# Teams Lineups: Renowned and one of the best English striker Wayne Rooney is the current skipper of the Three Lions.Besides, Harry Kane and Jamie Vardy would maximum chance to play their next match. Their current goalkeeper is Joe Hart. English team would probably play with 4 – 3 – 3 formation.

The Dragons are play with their remarkable 3 – 4 – 3 formation where their main attack used to lead by Gareth Bale, Aaron Ramsey, George Williams. Gareth Bale used to play in Spanish giant Real Madrid and considered one of the best forward.

# Prediction: It will be a tough job to describe which team will win among them. According to the last five matches of Wales, they won only one where England won three of them. But, if we consider their players, Wales is strong than the Three Lions. So, perhaps, the Dragons will win their next match against the Three Lions but their match would be hard contesting. So, the prediction is – Wales 2 – 1 England.