Basically, the result of this match should be Andy Carroll 3 – 3 Arsenal. We mentioned that this match would be draw and that happen in the end of the day. The gunners needed essential win cause of their league title winning race. Ozil & Sanchez goal on 18′ & 35′ make the score 2 – 0. But Andy Carroll on fire on this day, his 44′, 45’+2, 52′ goal simply damage the gunners. It seems that the hammers going to win this match in their home ground. But Koscielny’s 70′ goal made the score level by 3 – 3.

Arsenal going to play against West Ham United in a premier league match on 9 April 2016 at Upton Park stadium. The gunners standing on 3rd place on EPL table with 55 points and WHU on 5th position by 50 points. Team of Ozil isn’t in good form. They lost 2 matches in their last 5 matches. On the other hand the hammers never lost any match into the last 5. Alexis Sanchez, Danny Welbeck have to take the responsibility to ensure victory. Last season West Ham beat Arsenal by two goal but before that Arsenal was unbeaten against the hammers since 2007. So let’s see that the hammers can beat Arsenal or, not to rank up league table position. 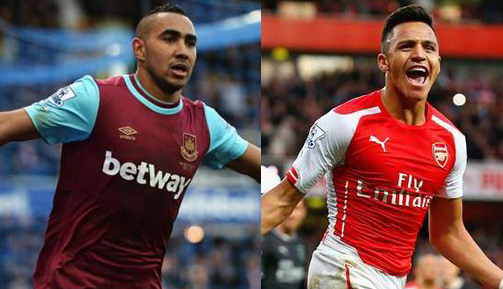 This will be fantastic game and should be mention the best fight of this week in Premier League. Both team standing with close together. The hammers playing good football from couple of months, specially the skill of French play maker Dimirti payet surprised huge audiences around the world. As this match will take place in London, WHM will get extra support & crowd from audiences. The gunner need essential win at this moment to alive their title winning.