It was a match for French footballer, both goal scorer from West Ham United and Manchester United was from France. As it was quarterfinals and huge amount of audiences attended in this game, old trafford was look like real scenario of red devils fans. People was eagerly waiting for goal of Man U but over and over again attack by the hammers frustrated huge audiences of Man Utd. Nigerian forward Emmanuel Emenike of WHU was very close to score goal where 2 of his on target shoot saved by the goal keeper. 68 minute goal by Dimitri Payet was just another best goal of this season by free-kick. Only 22 minutes left of the match and this time Man U started to attack very fastly and felt in huge pressure. Anthony Martial’s 82′ minute goal saved Manchester united to draw this match. It was clearly good finish by this french attacker.

After a poor performance in UEFA Champions League & Europa League, FA Cup is the best platform for the red devils to win at least a title in this season 2015-16. Manchester United will play against West Ham United in FA Cup Quarterfinal today on 13 March, 2016 in Old trafford which is the home ground of the team of Louis van Gaal. Considering the match on home field, Man U treating as the favourite of this match again. Though West Ham is a big opponent against them those are standing on better position then Man U in English Premier League point table. 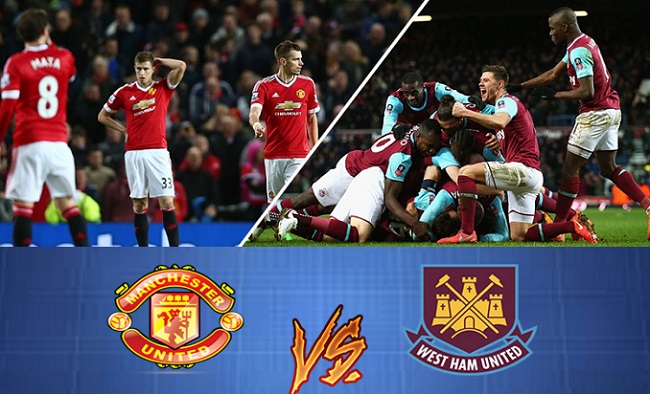 After finishing this FA Cup Quarterfinal match, highlights video will be available here

In Barclays Premier League point table, WHU and MU standing on 5th & 6th position respectively. Only 2 point difference between them right now. Though Man U played very well in past few weeks, but last two match losing against West Bromwich Albion & FC Liverpool was unfortunate for them. Wayne Rooney’s injury lacking was recovered by Rashford in past few matches. But his injury again hamper the performance of Manchester United. On the other hand, the Irons performance in last 6 matches is extremely high where they won in 5 and drawn in 1, don’t loss any matches at all.

As like every matches, H2H statistics can’t mention anything for English team cause every teams having experience to won against any other opponent. Recent performance will effect to make the result where we should give priority to WHU cause of their last matches straight win. As this game will take place in Old trafford, Man U would do something better as well.

Usually, English Premier League matches prediction become wrong cause of more uncertain case. However, our prediction for this match is 2 each draw.