Manchester United going to play their first friendly before the seasonal competition under Jose Mourinho. After Van der Gaal, it is the first game of the Premier League giant. The whole squad of the club is rearranged by Mourinho, so the match is very important for him. The match hosted at DW Stadium, UK. The both team has played 18 times in before and Red Devils are leading with 17 times and Wigan Athletic won only once.

Though it was just a friendly match but huge audience attendance surprised English football federation. Lot of people also watched this match in TV channel. As it was the first match under Mourinho, people eagerly waited to understand his plan for the red devils. First half finishing with goal zero draw which make worried to Man U fans. But the 2nd half was heavy enjoyable. Lots of attempts made by this most time EPL title winner. Finally goal come from Keane & Pereira on 49′ & 58′. First goal by Keane should be call own goal by the wigan goalkeeper. But the send once by Pereira was excellent to watch. Good start of this season by Man utd. without their icon footballer like Rooney, Ibra, Mata and so. 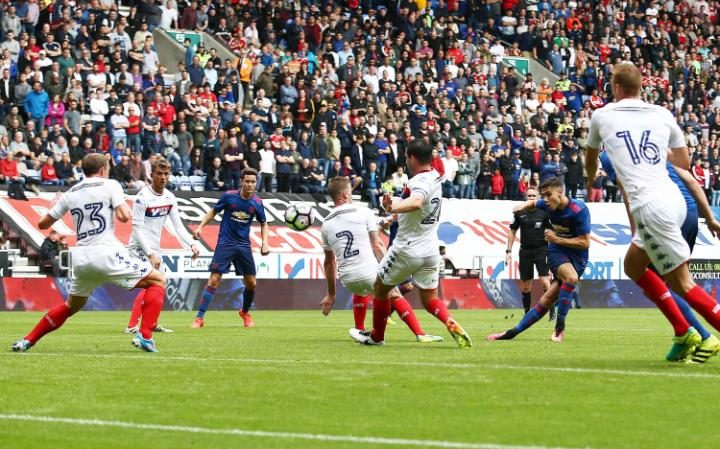 Event between: Wigan Vs Manchester Utd

The last match of United which was taken place on 21st May vs Crystal Palace, result won by 2-1 score. And the 17th May against Bournemouth was finished with 3-1 victory. If we see the last five event of United, we can see that they lost only one game against West Ham 1-0 and one match consisted as drawn with Leicester city. The other match was strongly won by the Old Trafford side. However, Wigan was lost their last match which was held on May against Barnsley. It was a terrible lose of 1-4 score. Last April they played total six games and won four and get drawn. The Average score was 2.66. The overall performance was not so bad of the Wigan Athletic. But this time they need to be more hard work because this season The Red Devils included some extra power in their squad like Zlatan Ibrahimovic, Henrikh Mkhitaryan and some veteran faces. The old and new combination of the player will rock summer. Keep eyeing and linked with us.