2016 edition of The ICC  (International Champions Cup) annual football club association competition has all set to kick-off from July. The schedule for the friendly exhibition confirmed on 22nd July with the debut games between Manchester United vs Borussia Dortmund in China. Last season the title grabbed by Real Madrid where the second and third place were holding by Milan and Inter Milan football club respectively. Manchester United is one of the best football club in the premier league and this season it has full chance to grab the title on their favor. 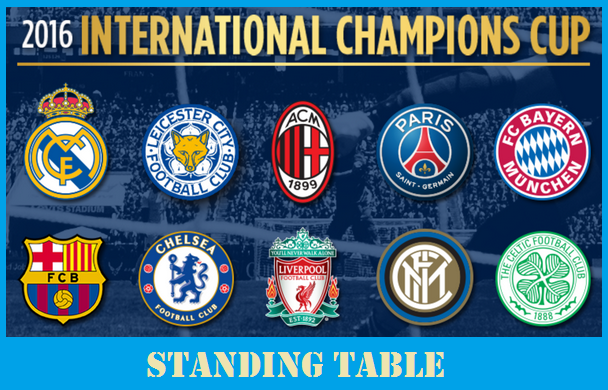 The Real are also snatch the Australian version with four points In December 2015. This season Juventus as well as Tottenham Hotspur and Melbourne Victory have confirmed for the Australian side. Last year victory have given them the chance to warm up the Australian version.  The one more contestant club Atletico Madrid will participate on Australian ICC this year in 4th edition. Atletico becomes the first Asian team who got the chance to Play in Australian side and the impossible has come to possible for the Melbourne Victory by the respective club. Here we conferring the point table for three different version of the competition.

But this season the competition going to be very tough because this season the group consisted many tough competitor in their side. Barcelona who consisted numbers of star player in their side have the high chance to win the title. The last year Australia and China champion Real Madrid also exist on the side. Chelsea who have recently won the premier League title also present on the North American side.

2016 edition going to be the fourth consecutive year of the International Champion Cup and Real Madrid became the most successful football club of the competition. In their appearances in North America side the other contestants got under the pressure. First the each team play their own group and after the group round the qualifiers will be combined for the battle of getting champion so far. For every normal win the winners get two points and win by penalty shoot will be counting of one point. After the group round the team will be ranked by their achieving point and the two top point holder will be promoted for the final event.