Summer transfer window is not faraway and the clubs are listing their targets and burdens. 57 English Premier League footballers’ contracts will reach the deadline on June 30. We are discussing various EPL clubs on various days. Today we will discuss about Sheffield United. Take a look at the guys who may make their way out of the Bramall Lane :

Phil Jagielka : The veteran center half joined The Blades in the last summer transfer window. It was only a year long deal for the former England international. He has not got so much football to play under Chris Wilder. In fact, he is on the verge of the retirement but it is not certain so far whether he will continue to play or net. However, he is such a key figure behind the scene. Thus the club may keep him as a player or may offer him to provide them other services. The experienced defender had a wonderful career at the Goodison Park prior to moving to the new destination. He represented the Merseydide Blues for 12 seasons and put the Everton shirt on for more than 300 times. Now it will be interesting in which role he is going to serve the club. 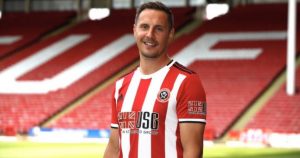 Jack Rodwell : The former Sunderland midfielder actually signed on short term deal. But he hasn’t been in Chris Wilder’s plan to be honest. Thus we expect the 29 years old to leave the club as soon as his contract expires on June 30. Although it seems very much likely, we can’t ensure you about his departure.

Leon Clarke : The forward played a key role in Sheffield United’s promotion season. But he hasn’t got enough game time since the side started to compete in the top flight. He got himself placed in the transfer list since the last two windows but no side came for him. Thus this time we expect him to leave when he will be a free agent.

John Lundstram : Lundstram still has the option of a further year. The club can take up that at any point. However, the club and the player has talked over a contract extension. Reports indicates that, a longer contract is very much possible on this occasion. So only time can answer whether the 26 years old will stay or leave the club.

Ricky Holmes : The 32 years old hasn’t got any game time throughout the whole season. Thus we expect him to leave in this transfer window and the move seems almost certain.