Former Liverpool defender Jamie Carragher who is currently serving as a SKY Sports pundit has talked about the toughest 11 players he has played against. In fact, the 42 years old center half has chosen the players position wisely and his selected xi includes a number of legends. Jamie’s team includes the following players:

Goal Keeper : Jamie has chosen Gianluigi Buffon as the toughest man between the sticks. He told that, both of them were born on the very same day and he also reminisced the goal he scored against the Italian. However, he didn’t forget to label the Juventus legend as the best keeper of his generation. 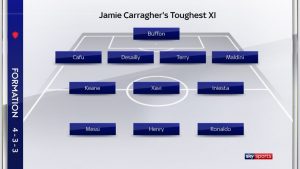 Full Backs : Although we have mentioned the GK first in this news but the Marseyside born defender firstly chose the two full back options. He mentioned that, it was the easiest category to select. Jamie Kept AC Milan legend Paolo Maldini in the left side of his defence and selected Brazilian world cup winning star Cafu in the right. According to Carragher, Maldini and Cafu are not only best full backs of their generation but also of all time.

Center Backs : Jamie’s choices at the heart of the defence were Marcel Desailly as well as John Terry. He described that it was men against boys when Desailly wanted to turn things on. On the contrary, the Reds’ legend thinks that John Terry is the best Premier League center half.

Midfielders : Jamie selected 3 players in the midfield. The list includes FC Barcelona legends Xavi and Andres Inietsa. He explained that, he just had to choose the Catalan duo for what they did for the Blaugranas. He put Xavi in the middle and his fellow country man Iniesta in the left side. His another choice was former Man Utd captain Roy Keane. Jamie also mentioned Andrea Pirlo. He appreciated the Italian midfield master but prefers Keane as he thinks, Keane will give proper organisation ahead of the back four.

Forwards : The 6 feet 1 inch tall defender’s front line consists of 3 star attackers. It definitely includes Leo Messi and Cristiano Ronaldo, the two most consistent as well as sublime forwards of the generation. Actually, anyone would have to pick the duo as the hardest opposition they would ever face. Apart from the duo, the Sky Sports pundit has selected Thierry Henry as his final forward. Jamie has put the Arsenal legend in the center of his front line. He kept Leo in the right side of the French man and placed the Portuguese in his left.