As we are discussing various club’s targets and probable departing players, today we will talk about which guys are leaving Burnley in the upcoming transfer window. The summer transfer window will start on July 1. So with the business time approaching, the Clarets are finalizing the list, which players they want to sell and release. Take a look at the list of the guys who are ready to depart Sean Dyche’s side :

Joe Hart : The former Man City shot stopper has left his best time behind. He was on top his form during his time at the Etihad Stadium. The 33 years old was the England national team’s number one keeper during the first half of the latest decade. But the Citizens sent him out on loan to West Ham United in 2017 and since then he started to struggle. Then he signed for The Clarets in 2018. But he is the 2nd choice keeper for the side behind Nick Pope. Hart has 3 more competitors apart from Pope. Thus we expect the former English number one to leave. However, he may stay if Chelsea or any other giants launch massive bid to buy Nick Pope. 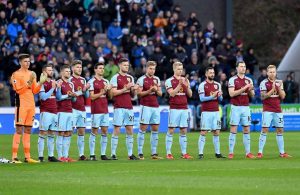 Aaron Lennon : The 33 year old former England NT winger has made 16 Premier League Appearances this season. The ex Tottenham star’s contract with The Clarets is coming to an end. But no talks over a new deal took place so far thus he may just be on his way out of Turf Moor. However, nothing is certain at all so far as Burnley may hand him a new contract after knowing the outcome of the current season.

Jeff Hendrick : Club and the player held a talk over a new deal but the two parties couldn’t come to an agreement. Thus it is very much likely that Hendrick’s time at the Turf Moor is almost over. So we expect him to be available in the upcoming July.

Phil Bardsley : The 34 years old signed for The Clarets in 2017. It is currently his 3rd season for Sean Dyche’s side. He has made 17 appearances util the postponement of the campaign. However, the Burnley boss kept him as the 2nd option behind Matt Lowton at the right side of the defence. Thus we expect the former Stoke City full back to leave the Turf Moor in this summer transfer window.

Adam Legzdins : The fourth choice goal stopper is the another man in this list who may leave the club on a free tarnsfer.