FC Barcelona have finished a wonderful La Liga season in recent times. Besides of the successive season they consume the best Spanish Primera Division year ever in individually. The three forward from the club taking place in top five position. The Uruguayan striker Luis Suarez standing on the top of the high scorer table. His 40 outstanding goals with 16 assists boost him to keep himself on the honorable place.

Real Star Cristiano Ronaldo scored of 35 which terminally behind of five goals from Suarez. The portuguese striker became the second most goal scorer in the Liga BBVA competition. 2011-12 edition was also damn good for the Real forward with 46 mind-blowing goals. 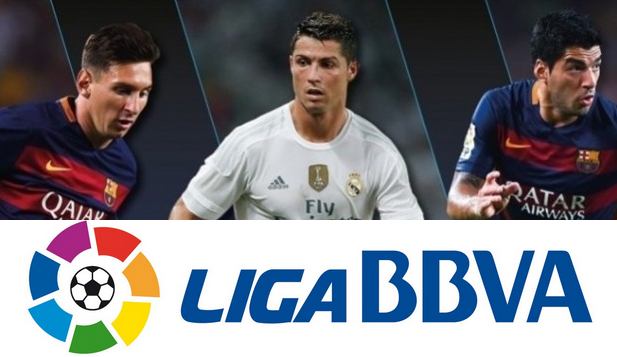 Brazilian strike Neymar Jr. became the third most goal scorer of the Barca club and also fourth most high scorer in the La Liga Competition. His 24 big goals and 12 assist was really fantastic but the season was not so good for the Barca star.

The French winger Karim Benzema also scored the same goals as well as Neymar and holding the fifth place in top scorer list. The one more French soccer A. Griezmann got the sixth place on the table with 22 goals.

If we find the name by nation, we will get the Spanish more. A numbers of Spanish professional undergo the table with their brilliant performances in the La Liga emulation. Apart of them one Venezuelan and one Paraguayan also included in the pane.

La Liga is the most popular football club tournament in Europe. The Spanish club competition consists of 20 clubs in every calendar of year. The top Goal scorer of the competition has been awarded with some honorable medal and a big amount of prize money.

Real Madrid became the most successful team of the La Liga competition. They have won the title for 32 times while the defending champion Barca grabbed it 24 times. Let’s wait and watch for upcoming season.