TOTS refers Team of the tournament or season which is reportedly conduct from the anticipated squad. The La Liga competition 2016-17 knocking at the door and the panel for best line up has been made according to the performance of the contributing soccer. Every circle of the  year a panel release out for the best XI performer of the tournament. Among the entire competition there have some electrifying performer as well as Messi, Suarez and Cristiano Ronaldo who create some extraordinary record and elected as the player of the event. We have got the last season result few days ago where football club Barcelona grabbed the title just one point more than Real Madrid. Here we made a list of best XI player of the season.

Football expert Terry Gibson has picked up his La Liga team of the season for the ongoing season. The football specialist has made some serious selections as it included some big names but some famous footballers have been ruled out due to their inconsistency and fitness issues. The former Spurs forward has chosen 11 players from the Spanish football’s top tier league according to their performances in the league on this campaign.

The Englishman who will turn 54 on December 23, has chosen 3 players each from Spanish giants Barcelona and Real Madrid. Among the other 5 players, 2 have been selected from Villarreal and 1 each from Atletico de Madrid, Sevilla and Las Palmas. World’s most time Ballon d’Or winner Lionel Messi has been included as expected but there were no room for the likes of current Ballon d’Or winner Cristiano Ronaldo, Barca’s Brazilian sensation Neymar Da Silva and Atletico Madrid’s French superstar Antoine Griezmann. The likes of Gareth Bale, Karim Benzema, Ivan Rakitic, Andres Iniesta also missed out because of their forms and fitness. 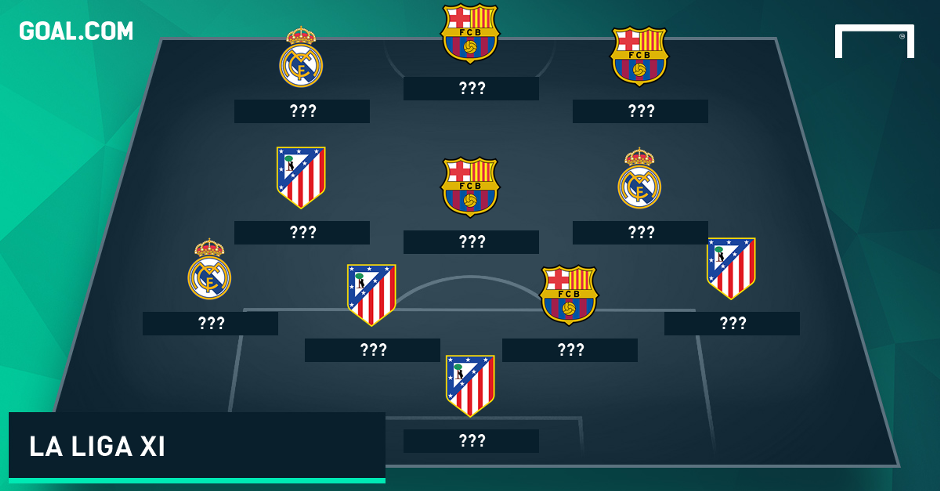 Goal Keeper: Sergio Asenjo (Villarreal) : Mr. Gibson has picked the Villarreal goal stopper for his number 1 position. He explains that the Yellow Submarines are the best defensive team in the league this season and as Asenjo has conceded the least number of goals, so he has been selected as the keeper of the season so far.

Right Back: Mario Gaspar (Villarreal) : The fullback has played in all 16 games so far and his team conceded only 11 goals while he was on the pitch. He has been impressive this season and got the reward to be selected ahead of Carvajal in Terry’s team.

Centre Back: Gerard Pique (Barcelona) : Pique has been rock solid at the heart of Barca’s defense. He has been a top defender and also handy as a head machine at the opposition’s box.

Centre Back: Sergio Ramos (Real Madrid) : Los Blancos captain is a big game player. This season he has had 9 appearnces so far for the Galacticos and got 4 goals beside his name.

Left Back: Marcelo (Real Madrid) : The Madrid full back is such industrious and also handy offensively because of his crosses and running.

Central Midfielder: Steven N’Zonzi (Sevilla) : He is a good midfielder and been impressive for Sevilla this season. So the former Man Utd forward has chosen him ahead of the other options.

Central Midfielder: Toni Kroos (Real Madrid) : The Brilliant midfield warrior of Germany is one of the hottest choices in the mid for any football expert and the Sky Sports analyst hasn’t been exceptional too, to select the Blancos’ midfielder at his team.

Right Wing: Yannick Carrasco (Atletico de Madrid) : The Belgian has been very impressive since last season and he is quite consistent too. So he deserved to be selected.

Left Wing: Kevin Prince Boateng (Las Palmas) : The Ghana international was picked as Mr. Terry showed his love for the Las Palmas and Boateng got the place ahead of many superstars of La Liga.

Play Maker: Lionel Messi (Barcelona) : The Argentina captain is an auto choice and no team can be fulfilled without the Barca magician. He has already scored 23 goals this season and has netted 12 times in the La Liga so far. He is always a certain choice for anyone.

Striker: Luis Suarez (Barcelona) : The most crucial pick up was this one but the expert has chosen Luis Suarez ahead of Ronaldo as the Portuguese superstar hasn’t impressed enough this season.

Jan Oblak became the outstanding Goalkeeper in the La Liga competition. Last season his great appearances really the eye catching part of the competition. His twenty four clean sheets saved the 3.5 average shots which really incredible. This season the football fans are waiting for his legendary performance.

The Barca center back Javier Mascherano consider as the best defender for any tournament. The Argentine present performance really prolific and he has the full chance to blast the La Liga season 2016-17 so far.

Diego Godin becomes the one more center back who has the great ability to defend the arena highly. The Uruguayan such a mind-blowing defender of the tournament and also consider one of the best center-back in the world.
The French attacking midfielder Antoine Griezmann one of the best soccer in the La Liga emulation. He has to be seen often playing in forward. His attacking way and art is too amazing and he probably make the same indeed like past season.

What about the three legend Messi, Suarez and Ronaldo. We think there need not anything to say about the forward. Their performance in all type of competition always mind blowing and flawless. When they play with the ball there hardly find out the players who able to stop them. Their performance is always too good. Not only the La Liga Competition their appearances in all competition unbeatable. So, it can be very easy to predict about them. The 4o goals of Suarez along with 16 assist in last season was superb and this year his attempt to warm up the game in same short. Cr7 was also able to make 35 goals on the same event. The alien messi became the lower score than Suarez and Ronaldo and this season he has the chance to move his position and raised themselves in the top.

Last year their intact performances snatch the million heart and the fan eager to watch the same short once again in this season.