In a crucial round of 16 fixture of the FIFA World Cup 2010, England came face to face with Germany. The game took place at the Free State Stadium of the Bloemfontein. Group D champions Germany got group C runners up England in it’s way towards to quarter final. More than 40 thousand fans gathered in the Free State Stadium. It was such a high voltage fixture. Germany got the better of the English side, credit to a 4-1 victory for Joachim Low’s side. Uruguayan officials were in charge of the game and they made a great impact in that game. Jorge Larrionda along with his fellow country men, made a horrible mistake which favoured the Germans. The decision ended up knocking the 3 Lions out of the tournament. 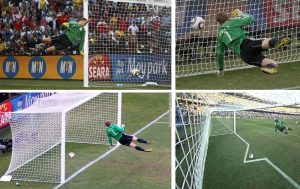 It has been ten years since that gloomy afternoon at the Bloemfontein. But thenceforth England national team manager, Fabio Capello is still haunted by the memories of that game. Miroslav Klose’s deadlock breaker at the 20th minute, was followed by Lukas Podolski’s lead doubling strike at the 32nd minute. The Germans got the control of the game but a Matthew Upson strike just 5 minutes later gave the Three Lions the confident. Soon they found land beneath their feet and started playing decorated football. Just before the half time, English midfielder Frank Lampard took a long range shot which kissed the post and entered inside the goal line. But unfortunately, the Uruguayan officials failed to get it and disallowed it. The goal line technology wasn’t even introduced and Capello’s side were deprived of a well deserved goal.

Recently the Italian (nationality) revealed that, the memory is a very much painful one and he couldn’t except it till now. The 73 years old added that, the German side was very young. Thus the equalizer would have put immense pressure on them. The former Real Madrid boss firmly believes, had the goal been given, there would have been a fully different circumstance in the 2nd half. He thinks that, it would certainly give their young opponents a psychological problem. Capello expressed his regrets for not getting the goal which they fully deserved and he just can’t get it out of his mind. He also said that, he really would have liked to watch the 2nd half (with 2-2 score line) which could get a new complexion. whatever, the mistake saw the England heading towards home. Meanwhile, Low’s side went onto the next round and even played in the semifinal.