World’s richest football club FC Barcelona and it’s players have come to an agreement that the squad members will take 70% pay cut due to Corona virus crisis. Leo Messi, the best footballer in the planet has ensured it with a statement. The action will help the non-sporting staff receiving the full wage. Barca is not the only club to take such action as German Bunesliga giants FC Bayern Munich and Borussia Dortmund too have taken such steps. Italian Serie A title holder Juventus FC players along with their manager Maurizio Sarri have decided to freeze their salaries for four months. 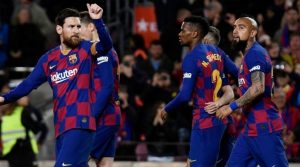 The Blaugarnas’ skipper revealed that, they were seeking for a formula which will help the club solving their economic crisis in such critical situation. He added that, this caused the move getting delayed. In fact, there is currently no continuation of football across the Europe due to the Corona virus pandemic. It has caused the clubs facing massive economic loss. The amount of loss is enormous and even such rich clubs are facing difficulty to adjust it. Thus they were searching for something which would release such pressure from the club’s economy. Now finally they have find a way to solve it.

The Argentine sensation said in a statement that they wanted to make it clear that they were always willing to reduce their salaries. Because they understand perfectly that it is an exceptional situation. He added that, he along with his team mates will always provide the helping hand when their club needs it. The 6 times Ballon d’Or winner also said that, they were giving priority to find the solution to help the club. They were to find, who were the most affected due to this crisis. The left footed magician further said that, the time has come which demands them to take just 30% of their wages which will help the workers getting 100% of their wages.

So the cut off payment will see the world’s highest paid footballer receiving 150k GBP per week in stead of his as usual 500k GBP weekly wage. The club’s board of directors, members of its professional sports teams have also agreed to reduce their salaries. The most of the basketball players have followed their footsteps as well. Spain’s national death toll now has gone past 7 thousand and 3 hundred mark. The Southern European country is the 2nd worst-affected country in the world just after Italy.