The UEFA Champions League title holders Liverpool FC have targeted some big stars. The list includes a number of wingers, a couple of midfielders and also some strikers and defenders. Let’s see which stars may join the Reds within the coming days :

Adama Traore : The All Reds have eyed Wolverhampton Wanderers’ winger Adama Tarore. He is one of the major targets for the EPL table toppers. Reports suggest that, either of the Mohammed Salah or Sadio Mane could leave the club. Thus they will have to ensure a back up option, if any one of the duo really departs. 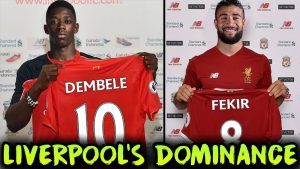 Ousmane Dembele : The French winger has been previously linked with Jurgen Klopp’s side. Now the 6 times UCL champions are set to launch a 81 million GBP bid for the FIFA World Cup winner. Dembele has been quite injury prone since joining Barcelona. But his speed and skill will definitely increase the attacking strength for Liverpool.

Malick Thiaw : Liverpool have also targeted Schalke’s center back Malick Thiaw. Some others EPL giants are monitoring the defender. The list includes the likes of Arsenal and Man City. The 18 years old has a release clause of 7 million GBP.

Evan Ndicka : Another targeted defender for the All Reds. The Eintracht Frankfurt center half is an exciting player and will be a good signing.

Fabian Ruiz : Jugen Klopp’s side have put the Napoli midfielder in their wanted list. The Daily Star has revealed it during the late March.

Timo Werner : The EPL giants are also monitoring this prolific German striker. Liverpool is not the only club who are keen to sign the goal machine. The Manchester giants are also considering a big money move for the RB Leipzig sensation. But the German international is still not convinced enough to join any of the EPL side over staying at the German Bundesliga giants.

Raheem Sterling : The in form Man City forward recently appreciated Jurgen Klopp’s side. It hinted that the England national team star, still has so many loves for his former club. But Sterling’s agent ensured that, there is no chance of the forward to rejoin his former side.

Philippe Coutinho : Reports suggested that another former Red, Philippe Coutinho to join the Reds once again. But it is nothing but a valueless rumour. The Reds actually have zero interest on bringing in the Brazilian play maker. The attacking midfielder is currently on loan at Bayern Munich from his parent club FC Barcelona.