Man City star Kevin De Bruyne has realized that he should play a bit longer after being in lockdown. The Corona virus pandemic has spread panic all over the world. It has taken numerous lives and threatening to take many more. Thus almost all the countries which are affected and probable victims, have decided to lockdown. Like most other parts of the world, the same condition going on in England and Belgium. City’s Belgian sensation Kevin De Bruyne is currently in lockdown with his family. The last time he played the game which he loves the most, back in March 1. 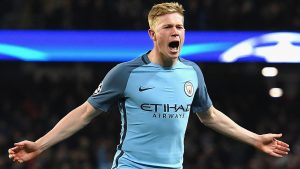 The 28 years old midfielder has been in home quarantine since the last few weeks. It has been gloomy condition for him. He informed his wife, he firmly wants to prolong his career. After the end of the lockdown, he won’t confine himself at the home. Thus he has decided to play two years more than the previously determined retirement date. The feeling has been really bitter and has made him realized how much important this beautiful game is to him. He added that, he really misses this game and is very much keen to get back into the field. KDB reveals it through an Instagram live video.

However, the former Wolfsburg sensation couldn’t deny that, life is much more important than football. He believes that, people love football but it is of much more importance that everyone should stay safe. That’s why, he doesn’t think the players as well as the game itself isn’t that much important on this case. The Belgian international has also confirmed that, his family and the kids are all okay now. Earlier they suffered a bit of sickness and that was definitely worrying. But now it seems to be pretty much okay. But he also revealed his concern that, it takes eight to nine days, thus he can’t fully ensures what is going to happen.

The Belgian Red Devil who started his senior career with Genk joined the English giants in 2015 from VFL Wolfsburg. He has been a key player for the Sky Blues since then. In the 1st leg game of the round of 16 of this season’s ongoing UCL campaign which took place in the late February, De Bruyne helped city getting a crucial 2-1 victory away from the home against Spanish La Liga giant Real Madrid. Last year, City boss Pep Guardiola labelled him as the best player in the English top flight.