Manchester United is one of the very famous club in the world also in premier league. It is one of the richest football club in world and its revenue is increasing day by day. They were overtaking Real Madrid and Barcelona by their revenue in last few year. The Red Devil got £615 million revenue in last year and also got £50 million of profit.

The Red Devil made contracts with Pogba and Ibrahimovic by spent a huge amount of money, they also improve contract with David de Gea. Last year Man Utd spent £232 for their player wage which is the height wage bill in the Premier League. They also spent £147 million for their new three Romelu Lukaku, Nemanja Matic and  Viktor Lindelhof.£45,000

After transfer Rooney and Bastian Schweinsteiger to other club, Manchester United’s wages cost is decreased. But they still in top wages paid club in English Premier League or one step lower than Manchester City because Man City spent huge money in the last summer. 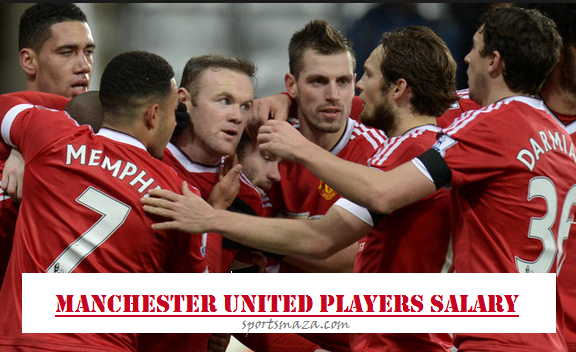 Since the beginning, many talented players signed to this club which were chosen by the authority. Some of them, usually takes huge amount of transfer fee as well as weekly wages. Currently around 34 players are under contracted with this club where the skipper of this club Wayne Rooney is given the highest amount of weekly wages with £250,000.

Manchester United is one of the biggest club in English Premier League and it’s total worth is £383,02 million. It’s average contact amount is £13,68 million and it recently buy and sold many players. Different countries player is playing in this club. It paid gorgeous salary yearly every player. Here we make a content about it’s yearly salary of all players.

Manchester United is the most successful club in English Premier League which was founded in 1878 and renamed in 1902. It is also one of the Big Four clubs in England. The Red Devils won 13 EPL titles whereas its nearest opponent claimed only four. It is also the 2nd highest earning football club in the world with €518 million annual revenue as well as the most valuable club according to the June, 2015 statistics which consists of $1.2 billion net worth.

For upcoming EPL season, Manchester United have signed three players. Eric Bailly is one of them who is taken from Villarreal with an undisclosed fee. He is an Ivory Coast defender. Swedish striker Zlatan Ibrahimovic from Paris Saint Germain which is a free transfer but order to give £200,000 per week with an one year contract and Armenian playmaker Henrikh Mkhitaryan from the BVB. His transfer fee is not disclosed but contract duration is four years.

Besides, four players have released from the Red Devils this summer with other four are sold. The new coach of Manchester United is looking for their fourth signing which will be French midfielder Paul Pogba in exchange for a highest amount of fee.

In 27th may, 2016, Jose Mourinho is given to the new manager of the Red Devils with a three years contract where they also put an option to extend that contract till 2020.

Though, they are the highest winner of EPL but they won their last Premier League title in 2012/13. Since then, they passed a poor performances and last season they finished their competition with standing in 5th position. So, their new coach Mourinho is currently working to start his first as well as upcoming season with best format. So, he is trying to recruit best players as well.