Italian legend Paolo Maldini who is currently serving the role of the AC Milan’s technical director, has been affected by the Corona Virus. Report came out positive making the former star defender it’s new victim. However, he is not the only person in his family to get affected. Because his son Daniel Maldini’s report too has been positive. The scary virus has spread fear as well as turned so many healthy people into dead bodies within a very short period of time. It has been a very very tough period for this southern European country. The number of affected and deaths have gone way beyond the number of China and even some of the star footballers have got affected as well. 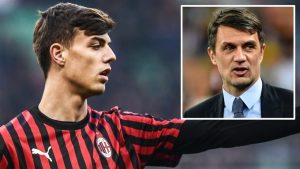 Firstly, Juventus star Daniel Rugani and his pregnant girl friend’s reports came out positive. Then another Juve sensation Paulo Dybala along with his sweet heart followed the same footprints. The list got extended with the addition of Blaise Matuidi. Now the Maldinis (Paolo and Daniel) makes it more longer. The former rock solid defender revealed he came in contact with a suffering person. Then the symptoms started to express and he put himself in quarantine.

Both the father and son completed two weeks’ quarantine at the home without contact with others. But now they will have to continue the process at their home as long as the virus gets cleared. A swab test took place on the Friday (21st March) and the result was positive. The 7 times European champions confirmed it just a day later. Numerous fan across the world wished the duo a quick recovery through social media.

Paolo is a true legend of AC Milan. He has served them for years as a player. After his retirement as the on field player, he continued his relation with the Red and Blacks off the field. Now he is serving the role of the technical director and his teen age son Daniel too has followed his dad’s footsteps. Although his father is considered as one of the most succesful center backs in the football history, the 19 years old has chosen to play as a forward. He currently plays for the AC Milan under 19 side as a right winger. Before getting affected he even practiced with the main team of this San Siro based side. Now the fans and the officials will be hoping that the list doesn’t get extended any more.