Football is currently off but the websites are busy revealing the TOTS and POTS. Yeah, it doesn’t need mentioning that, “TOTS” refers to Team of the Season and “POTS” refers to Player of the season. Meanwhile the readers are busy voting their opinion to help the websites fixing these. By reading this article you will know who are the players of the season for every EPL side of the 2019-20 campaign.

Arsenal : The Gunners skipper Pierre Emerick Aubameyang has been kind of a one man army at the Emirates this season. Which resulted him getting 69 percent of the vote.

Aston Villa : Yeah, you know the name even before mentioning it. Who else but Jack Grealish to grab the spot. The Villa captain has received a mammoth 85% of the vote. 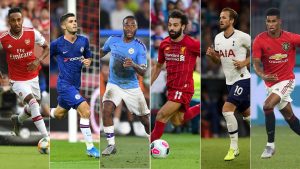 Bournemouth : Goalie Aaron Ramsdale became the readers’ player of the season with 47% of the vote.

Brighton : Another captain to dominate the chart. The Brighton defender received 49% support from the voters.

Burnley : Dwight McNeil had a tough competition with goal keeper Nick Pope. But somehow prevailed with 31% of the vote.

Chelsea : Mateo Kovacic has been superb this season. Thus the Sky Sports users select the Croatian. In fact, the website used the comments from it’s user to name the former Real Madrid man.

Everton : Dominic Calvert Lewin the English forward received 59% vote to be the player of the season for the Marseyside Blues.

Leicester : The Foxes’ talisman Jamie Vardy won the race with 34% vote. His consistency in goal scoring saw him being the best player of his side.

Man City : One of those easiest picks for the fans. Who else but Kevin De Bruyne to be the best of the campaign for the Citizens. The Belgian received 81% of the vote.

Man Utd : Such a hard fought battle between Marcus Rashford and Fred. However, the aforesaid striker prevailed with 31% vote meanwhile the Brazilian gained just a percent less.

Newcastle : The Magpies’ goal stopper has been rock solid in between the sticks and deservingly won it with 64% vote.

Norwich : Todd Cantwell cheaply prevails with 33 percent vote. He has been the only Norwich player to feature in all 29 EPL fixtures this season.

Sheffield United : Goal Keeper Dean Henderson won the prize with 32% of the votes.

Southampton : Danny Ings received as much as 81% vote to snatch the glory.

Tottenham : South Korean sensation Heung Min Son got the result of his brilliant display this season with 57% of the vote.

Watford : Another goalie in the list. Ben Foster earned it with 44% vote.

West Ham : One of the youngest men on this chart. 40% of the vote from the fans helped the 21 years old receiving such an honour.

Wolverhampton : Winger Adama Traore got 42% vote to win the race. He has been completely outstanding this season and getting his reward.