Poland football team which is controlled by Polish football association, currently occupies the number 7 position in the FIFA ranking. Poland might not be the hot favourites of the tournament but they have the capability to produce some significant upsets. The Polish team was in the pot 1 during the draw of the FIFA World Cup 2018 which was held in the Moscow. Poland will play in the group H and will face Senegal, Colombia and Japan in their 3 group stage games. Poland vs Colombia is going to be a treat to watch for the football lovers as both the sides match each other quite well. 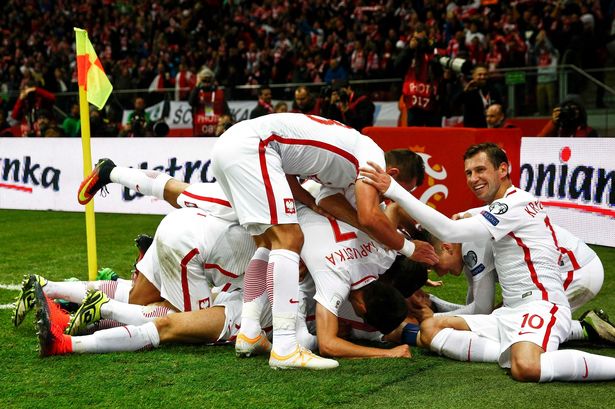 Tournament History : The “Biaolo-Czerwonis” has appeared in total 8 world cups so far and this is going to be their 9th appearance in the biggest competition of the world football. They first featured in the 1938 edition in France. Poland hasn’t played in the last two campaigns as they failed to qualify in both the 2010 and 2014 as they ended up being the 5th and 4th team of their qualifying groups and they are returning to the central stage after a long gap of 12 years. The Eagles last played in the 2006 Germany edition but failed to cross the group stage barrier as they finished as the 3rd placed team of group A with only 1 victory and two defeats.

Recent Results : The White and Reds have been in top form recently as they qualified as the table topper of the qualifying group E of the European continent. They grabbed 25 points from their 10 games with the help of 8 victories and 1 draw. They just tasted 1 defeat against Denmark. They also reached the quarter final stage of the UEFA Euro but unfortunately got themselves out of the tournament by the campaign’s champion Portugal. But fairly the Polish side played the better football than their counter parts on that occasion but luck is not in hand and they had to be satisfied with an unfortunate result.

Story and Strength of the Squad : If you talk about the Poland football team, you are bound to talk about their captain Robert Lewandowski who is the face of his country’s football. He was the top scorer for his country in the world cup qualifying stage with 16 goals! The Bayern Munich striker is known as the goal machine and how much devastating he can be on his days, if you have any doubt, just ask the goal keepers of the Bundesliga. The former Borussia Dortmund sensation had scored 5 goals within 9 minutes against Wolfsburg. Napoli striker Arkadiusz Milik is the another star of the side who can score on big occasions. West Brom midfielder Grzegorz Krychowiak will be the key in the heart of the midfield. Juventus goal stopper Wojciech Szczesny is a reliable option between the sticks. Eyes will also be on the Monaco defender Kamil Glik.