Bournemouth goal stopper Aaron Christopher Ramsdale expressed his thoughts about calling off the EPL season right from here. The young goalie has highly opposed such kind of actions. The 6 feet 2 inch keeper labelled the situation as “Cruelty”. He also described that it would be hugely unfair if the authority calls an end to the ongoing campaign. He indirectly admitted that it would be fair to crown the All Reds as the champions who are way ahead than the rest of the clubs. But he forcefully said that, it is very much tight at the bottom part of the table. There are lot of dramas yet to happen and you just can’t call it off. 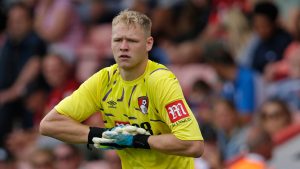 The 21 years old, young sensation revealed all his concerns to the Sky Sports News. He didn’t only indicated his side but also the unfairness the decision would be to the Villans. He added that, it would be much more hurting for the Aston Villa. The Stoke on Trent born footballer reminded that, the Birmingham based side, did very well to get into the Carabao Cup final and that caused them playing a game less at the moment. That’s why, he firmly believes that, Dean Smith’s side wouldn’t even be at the bottom three, if they had played a game more, just like most of the clubs.

The EPL table’s bottom part is pretty much tight at this moment as the 16th, 17th and 18th place sides do have gathered the same number of point after playing 29 games each. West Ham, Watford as well as Bournemouth all the 3 clubs have got 27 points beside their names. Only the goal differences have differentiated all the 3 sides. Thus the former Sheffield Utd keeper’s logic makes huge sense. That’s why, he just can’t accept such kind of decision.

Aaron seemed really anxious when he was talking to the Sky Sports News and it reflected in his speeches. He added that, they have worked pretty hard and they want to continue. They just don’t want to be thrown away to the lower division. He also talked about the difference of playing in front of the fans and in absence of them. The young goalie described the Bournemouth fans as a massive driving force. He further said that, 3 games a day and if every game is televised, then there would be lot of entertainment for the fans. The young prospect also said how much tough it has been to not to go to the training every morning due to the outbreak of the Corona Virus.