As many as seven AFC Bournemouth players are on the verge of leaving the club. The list includes players of various positions who are most likely to move to the new destinations. The Summer transfer window will be open on July 1 and teams are considering whom they want to sign as well as whom they want to sell. Take a look at the list of the guys who may make their way out of the Dean Court in the upcoming July :

Ryan Fraser : According to the reports, Arsenal tried to sign Fraser last season. But somehow the Scotland international stayed at the Dean Court. He has made 28 appearances this season. However, only time can answer whether the Scottish will remain at the south coast or make his move. 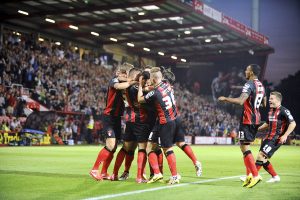 Jordon Ibe : The Cherries signed him with lot of expectations but somehow he has failed to prove his worth. He joined Bournemouth in 2016 from Liverpool for 16 million GBP. The speedy forward made just 4 appearances this season. Thus we expect him to leave in this July.

Charlie Daniels : The full back just managed to make 2 appearance this season. Diego Rico has been consistent in Eddie Howe’s starting line up. Moreover, Lloyd Kelly is currently injured and will also push for a place in the upcoming season. Thus the left back’s time at the south coast might probably coming to an end.

Simon Francis : The veteran did play a vital role in taking The Cherries to the top flight. But he is already 35 and should vacant a place for the young stars. Thus he also gets a place in this list.

Andrew Surman : Surman’s situation is quite like Francis’ and the 33 years old may also leave the Cherries. He has served the club for six years and has been one of the most consistent performers’ for them.

Artur Boruc : Another veteran on the chart. The goalie was handed a surprising season long contract at the start of this on hold campaign. But he hasn’t made any appearance this season. Thus we expect the shot stopper to leave on a free transfer.

Brad Smith : He ended his loan spell at Cardiff. But his loan spell expired just along with his deal with Eddie Howe’s side. Thus the 26 years old left back is ready to leave the club. In fact, he will be available on a free transfer.

Bournemouth manager Eddie Howe has also targeted some players and will try to bring them in at the Dean Court.