The Centennial event of Copa America is going to be started on next June, 2016 in United States which is the very first time organized outside of South America. As a result, North and Central America also participate in this biggest football event. So, enlarging participant from ten to sixteen teams. It will be a join venture of both CONMEBOL and CONCACAF. Among the teams, ten (10) nations from CONMEBOL and rest six (6) are from CONCACAF.  Colombia is one of them as a CONMEBOL and one of the most potential opponent to the title. They got 1st Copa America trophy in 2001. Such kind of matter could happen again, hoping by Colombians. 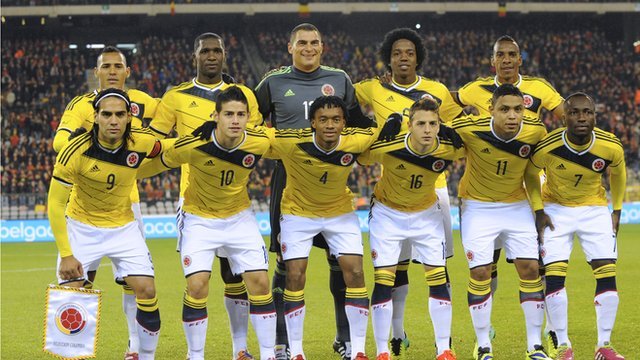 [Main squad will be published on around April, 2016. Stay with us to get up to date list]

Obviously, Colombia has some world known footballer like James Rodriguez, Radamel Falcao, Carlos Bacca, Critian Zapata and so on coached by Jose Pekerman. James Rodriguez is also captain in this team and a very rare talented player. For his performance,he is picked up by Spanish giant club Real Madrid. He is an attacking midfielder or winger. He is in form now. The season of 2014-15 & 2015-16 in club football, he has totally played 42 apps and has got 17 goals. In International format, his last goal was against Chile by scoring 1 goal where they drawn by scoring 1-1 in FIFA World Cup Qualification 2018. Radamel Falcao is a famous forward who plays for the English popular club named Chelsea. Let’s take a look below where the possibly best eleven is listed.

Though, Colombia is standing on 8th position according to FIFA’s statistics but their current performance is not good enough. If we look to their last three matches against Argentina, Chile and Uruguay, they lost both two matches against Argentina by scoring 1-0 goal and Uruguay by scoring 3-0 and drawn one against Chile by scoring 1-1 goal. They did not win cause they did not afford their best in those matches. But recent situation is far different from then. They have learned their fault from those games and make a balance team which can attack stronger than ever. They have two super fast fearsome attacker named Radamel Falcao and James Rodriguez. Their current performance is so good and they have enough strength to destroy enemy teams defense. The substance is ,they are desperate to win this title for 2nd times.

So, hopefully, Colombia will play good football in this popular, renowned and very exciting tournament and having more chance to win this title. Stay and connected with us for more update.