Copa America, simply known as Copa America Centenario this year. It is a South American football competition which is going to be started on 3rd June, 2016. Completing of hundred years of Copa America, this year it will be celebrating event. For hundred years anniversary, it is called Copa America Centenario. For this amazing anniversarial event, this year Copa America will be going to be contested among sixteen teams where 10 nations from CONMEBOL and other six from CONCACAF. Team Mexico is one of them as a CONCACAF which is the first time for Mexico in Copa America. According to FIFA ranking, Mexico is now standing on the 22nd in the world but their current performance is very impressive. They simply won their last four (4) matches by destroying Panama scoring 1-0, El Salvador by scoring 3-0, Honduras by scoring 2-0 and defeating Senegal by scoring 2-0 goals where Carlos Vila has got 2 (two) goal respectively. So, this continue winning of Mexico,would possibly give them extra confident to win next matches as well as Copa America title for the first time in history. So, let’s take a look of Mexico possibly team squad for Copa America 2016 listed below. 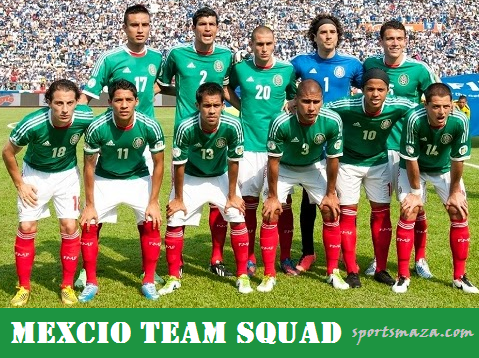 [As soon as the main squad will announce, we will update you]

Yes of course, Mexico has some young talented player captained by Rafael Marquez who is a great defender and coached by great former Colombian midfielder Juan Carlos Osorio. He is trying his best to improve team’s skill and he is very hopeful for his team. Mexico has two great forward named Carlos Vela and Javier Hernandez.They are in form now. Their current performance is very good which could possibly give them extra confident. As a CONCACAF, here is a chance for them to play good football and win the title of Copa America first time and make it a history. So, their coach would possibly make a balance team to win such kind of big tournament. Here we present a possible best eleven listed below.