Federation Internationale de Football Association or FIFA has recently revealed the most speedy footballers list where they started a survey of the fastest footballers during the season of FIFA World Cup 2014 in Brazil. In the whole competition, they monitored the players pace and finally considered Dutch player Arjen Robben as the fastest footballer who ran almost 37 km/h during the group competition against Spain. Since then, the record is yet to be broken by any player. Nowadays, in the top league competition, the pace of the players used to monitor by FIFA. 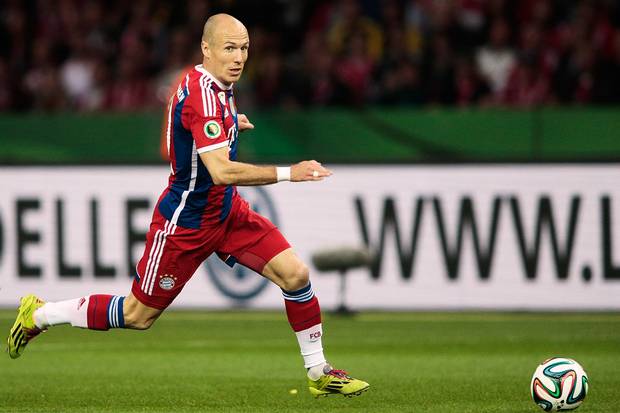 Top 10 Fastest footballer of the world

In the last season of FIFA world cup, this Dutch striker Arjen Robben almost destroyed Spanish defense and beat them by 5 – 1 and this fast forward played the key role. In the match which was group stage, he scored a pair of goals and made a sprint of 37 km/h which still regarded as the fastest since the time FIFA started to monitor the speed.

Shane Long who is the player of Republic of Ireland and currently playing for English club Southampton was the second speedy footballer with his 35.31 km/h run. Besides, it is also the fastest run in Premier League history since FIFA started to notice the speed. According to the above list, Antonio Valencia is in 3rd position with 35.2 km/h. We present above the top ten speedy footballers list but however, among the top speedy players list, two best players Lionel Messi and Cristiano Ronaldo could not take place but expanding the list, they are placed in 14th and 15th position where CR7 made his highest run with 33.6 km/h  and Lionel Messi run with 32.5 km/h.

Manchester United player Eric Bailly is in 11th position with 34.5 km/h, Theo Walcott is in 12th position where Aaron Lennon in in 13th speedy footballer in the current football world.

However, speed in football competition is one of the major fact to lead the team and in that case, Lionel Messi is also one of the speedy footballer and along with his speed, he utilize his amazing dribbling skills and became unstoppable. However, according to the La Liga physical performance statistics, Wales player Gareth Bale’s made his speed 34.7 km/h against the match with Barcelona and scored goal which is the record speed in Spain till now. Like this, in every cases, speedy speedsters can change a match future instantly.

Besides, according to some other news portals also revealed the highest speedsters results where English player Wayne Rooney also made it to the list. He is the leading scorer of all time in Manchester United who made his top speed 31.2 km/h. According to the Mexican club C.F. Pachuca, Gareth Bale is placed on the top of the speedy players list where CR7 is in 7th and Messi is in 9th position so far.