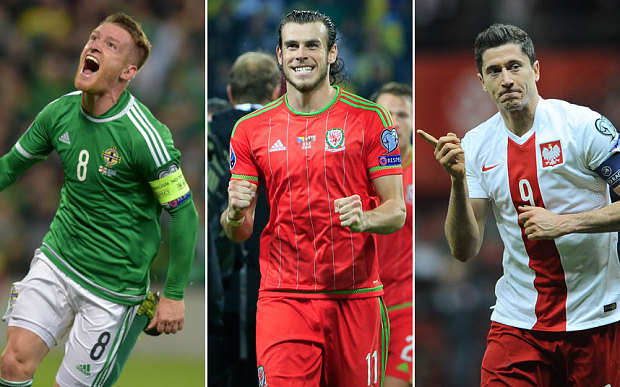 Fifteenth (15th) edition of UEFA European Championship which is generally known UEFA Euro 2016 or Euro 2016 is going to kick off in next 10th June, 2016 including one month duration. UEFA Euro championship is examined the world 2nd biggest football event after FIFA World Cup throughout the world nowadays. nce is going to host this largest tournament which will be the 3rd time for them to host this Euro championship.

There are many famous players will take part in this largest historical football event where some of them are very experienced and some are young and talented. But one thing is common about all of them that is they are here to show their capability.

Football competition is always defined by the number of goals. Who has got more goals, is the best successor. In this time of UEFA Championship, there are some players those have enough ability to score more goals than others. Let’s see their details below.

Portugal striker Cristiano Ronaldo will be the most focused player this time of UEFA 2016 who has claimed three times Ballon d’Or title. He is considered one of the greatest footballer of all time. He is playing for Spanish club Real Madrid, where he has totally played 231 apps and scored 254 goals and the last season season 2015/16, he has scored 29 goals with 31 apps. He is also one of the highest scorer of last season of UEFA 2012 where he scored 3 goals.

22 years old, Belgium striker Romelu Lukaku is a famous player nowadays. He is currently played for club Everton where 2015/16 season, he has played 28 apps and got 18 goals. He will be the team Belgium’s trump card in Euro 2016 beside Eden Hazard and Marouane Fellaini.

Welsh forward/winger Gareth Bale is reviewed one of the top forward nowadays. He has got 19 International goals for team Wales and for club, he is playing for Real Madrid since 2013 and last season, he has played 19 apps and got 15 goals. He would play the main role for his team Wales in this season of UEFA 2016.

Besides, there are too many famous footballer will play in Euro 2016. Here we can not describe it at all. Like Olivier Giroud and Paul Pogba are very potential player for France, Nani, Renato Sanches would be very dangerous for the opponent team, Diego Costa, Munir El Haddadi, Pedro and Paco Alcacer are very tough opponent to handle, German footballer Thomas Muller, Mesut Ozil and Toni Kroos are very faster footballer who would turn the match statistics and obviously Croatian midfielder Luka Modric and Sweden national football team forward Zlatan Ibrahimovic would have enough ability to destroy enemy defence. So, they are all being focused player in this season of UEFA Euro 2016.

Euro Championship used to held after every four years since the inaugural season of 1960 under the authorisation of Union of European Football Associations (UEFA). 14 season of UEFA Euro have passed already which has won by nine various nations. Now the time has come for 15th season where 24 teams will compete. 53 teams were playing in the qualification round to join Euro 2016 tournament where France is automatically qualified for main event as a host nation.

UEFA Euro 2016 Championship will be the very exciting football competition and every single player will try to be a hero. That will be amazing.

So, stay with us to be updated.