A British charity event named Soccer Aid under the charges of United Nations International Children’s Emergency Fund (UNICEF) is going to arrange a celebrity football game to collect money and support for those childrens who are in danger. If there is a football match, there is a huge charity collection. Since 2006, UNICEF used to arrange a friendly football match that took place between England XI and rest of the World XI.

This Soccer Aid friendly match comes after every one year and this time it will be 10th years passing and 6th edition of this event will be placed at Old Trafford in next 5th June, 2016. It will be 5th times that the match will be hosted in Manchester United’s home arena. Here we present full details of Soccer Aid 2016 match below. 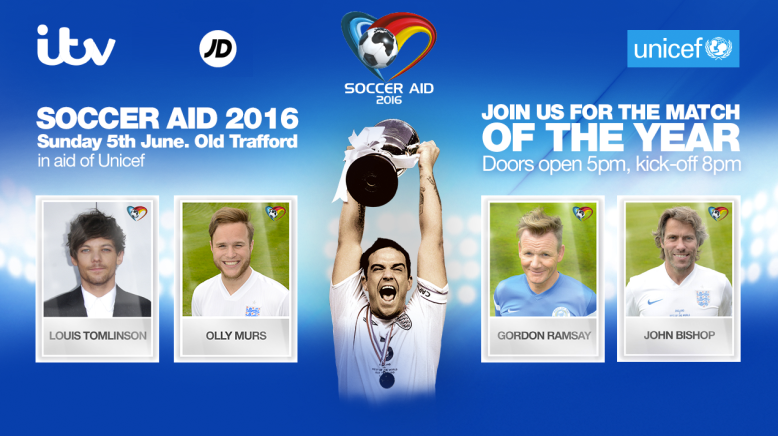 Former Chelsea Coach of Premier League Jose Mourinho is given manager to England XI. He was a central midfielder. Famous english singer Robbie Williams will led the team England XI. England XI has some great players like David Beckham, Steven Gerrard, Michael Owen and some celebrities like Mark Wright, Marvin Humes, John Bishop and Jack Whitehall. The full team squad of England XI is given below.

The World squad will be managed by Claudio Ranieri who is currently the manager of Leicester City of Premier League. This World XI will be led by another famous actor Michael Sheen. The World team squad has picked some football legend like Argentine great Diego Maradona, Portuguese star Luis Figo, French Thierry Henry and so on. Some celebrities also participate in this historical match once again like James McAvoy, Gordon Ramsay, Mike Myers, Gerard Butler and Will Ferrell. Once again the fans of football will see some legendary footballers together in Old Trafford. Here we provide full squad of rest of the World which is listed below.