English XI won once again in Charity match by UNICEF which held on June-July in every year. From last couple of years, Rest of the world can’t win any more. This match is just about entertainment where lots of aged footballer and icon personalities participated on. Huge audiences bought this ticket which raised the revenue to expense for child.

Unicef Soccer Aid started their journey in 2006 where their first charity tournament was placed in the same year at Old Trafford, Manchester. Unicef stands for United Nations International Children’s Emergency Fund which was going to arrange a celebrity football match between England XI Vs Rest of the World XI. Many famous celebrity as well as Singers, Comedians, Actors used to participate in this celebrity match. So, let’s take a glance below where the short details of upcoming Unicef Soccer Aid 2016 match details is given. 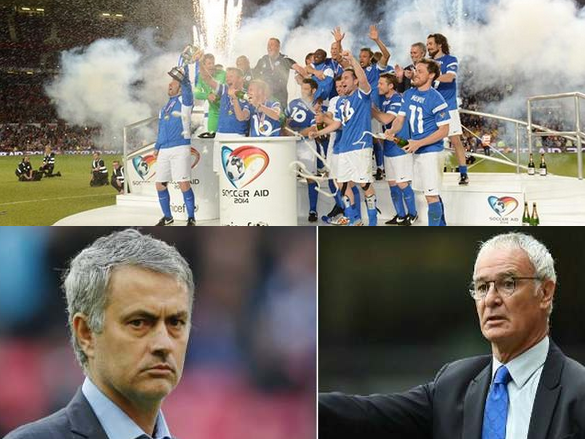 They were here to help to collect money for orphans children. Till now total five edition of soccer aid tournament has passed already. It is used to come after every one calendar year. It’s been long ten years have passed since the established of Unicef Soccer Aid and now the times has come for sixth edition which is already scheduled to place in next 5th June, 2016 at the same ground named Old Trafford, Manchester, England.

According to the previous statistics which is given, England XI and World XI played against each other total five times where UK 11 defeated World XI three times in 2006, 2008, 2012 and lost twice times in 2010 and 2014. So, hopefully their upcoming match will be contesting as well as more exciting.

England XI is currently captained by Robbie Williams who is a professional singer, actor, record producer, musician and also songwriter. David Beckham will also play for England XI and he will be the top player in English team. David James will be the goalkeeper of English team squad. Sam Allardyce who is also known as Big Sam is appointed as a manager of British XI. He is also the current manager of English club Sunderland.

Rest of the World XI is led by Michael Sheen. Many former famous players will participate here. Like Argentine legend Diego Maradona, Portuguese Luis Figo, French Thierry Henry and some others. Jose Mourinho will manage this team. Let’s take a look below where the full team squad of World XI is given.