Liverpool FC’s Dutch sensation Virgil van Dijk reveals that he wants to be remembered forever as a Liverpool legend. The Netherlands international recently spoke to Spanish media outlet “Sport”. He expressed his feelings to them and cleared what he thinks about his career, future life as well as fan’s love. Virgil is currently one of the best footballers in the planet and most probably the best among the defenders. His success in recent years have definitely increased his appetite and his revealed desire indicates how much famous he is wanting to be. 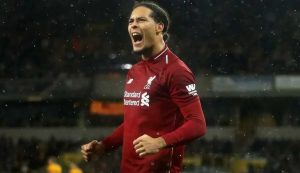 The 28 years old footballer initially made his move to the English top flight from Scottish side Celtic, back in 2015. However, after 3 seasons at the St Mary’s Stadium, he joined the All Reds in 2018. Jurgen Klopp didn’t make any mistake at all to recognize the gem. The former Borussia Dortmund manager brought in the tall defender at the Anfield for a club record 75 million GBP. People had doubts if he was going to repay his German boss with his performances or not. But as soon as the time passed, he proved that the deal was a bargaining one for the English giants.

The Breda born footballer snatched the limelight upon him with his sublime performances. Thus soon he became the fans’ favourite as well. So far, the strong center half has appeared in 148 matches for the All Reds in the EPL. He has helped the side keeping 57 clean sheets during this appearances and has an enviable 70% tackling success. The super star has scored 12 games in the highest tier competition of English football. On the contrary, he has just made a single mistake so far which lead to goal.

Apart from this, VVD helped his club reaching UEFA Champions League final on two consecutive occasions. Although Klopp’s lads failed to win it in the 2018, last season they made no mistake. The Anfield based side won their 6th Euroepan title and Van Dijk played a crucial role in it. Now the 6 feet 4 inch tall defender is aiming something much bigger. Liverpool do have a great history and have got so many legends in their bucket. Now the Dutch star wants to place himself in this remarkable list. The former Southampton defender added that, they have all the tools necessary to go on winning. He also admired his current boss and labelled the squad as versatile. He also didn’t forget to appreciate the superb atmosphere of the Anfield as well.