Five times FA Cup winning West Brom finished their last season at No #20 and can’t participate in 2018-19 Premier League season. WBA have to fight in Sky Bet Championship this year to come back in EPL again. We are going share West Bromwich Albion players salary list which is actually collected from different UK based news portal. Team Sports Maza is also concentrate in some forum to find out the exact wages bills of the Throstles. 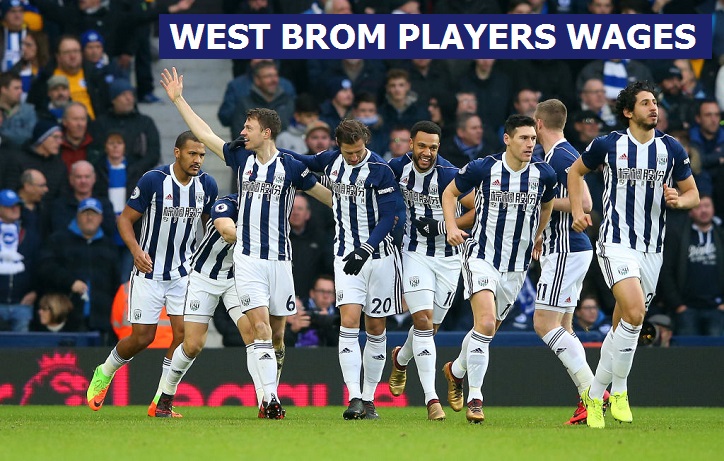 The manager of this club Darren Moore took a good decision by hiring Chinese footballer Yuning Zhang in last season by loan transfer from Werder Bremen but finally can’t keep him though. Jonny Evans’s move to Leicester city from West Brom is possibly hamper the defense of the Baggies. They should keep back Egypt center-back Ali Gabr right now as well to qualify for EPL once again.

It’s should to mention that WBA is another rich club of Premier League and it’s total worth is almost €104 million according to transfermarkt. Though the recent year performance of this English club isn’t much more better but they have goodwill to make legend footballer. To participate in Sky bet Championship and Carabao Cup is a also a big challenge for this middle order club right now and they should looking for some more extra ordinary player.

There is a quote that as much you have money, as much renowned team you are which means the Baggies have lack of money is pocket right now and that’s why we can’t watch expected level football from them.

West Bromwich Albion is an English club, its plays all of English professional league which is established in 1878 and it also known as The Baggies. Different countries players are playing in this club. Here we make a yearly salary table of this club. This club paid a gorgeous amount to every player in yearly. So guys let’s see who gets how many form this club.