Maratona di Roma or Rome Marathon is one of the leading annual marathon competition which has been apprehended at Rome city in Italy. The competition take place on Sunday, March in every calendar year. A huge numbers of male and female athletes take part in the Rome Marathon and won different type of medals and prizes money in every year. This season the running competition will be rendered on 10th April where two types of competition will be going-on, by distance of 20 minutes. The Marathon run competition will start at 8.50 am and the 5km run will be started at 9.10 am. The first finishers both male and female will get €40,000 prize purses as well as the second and third finishers will win €20,000 and €10,000 respectively. 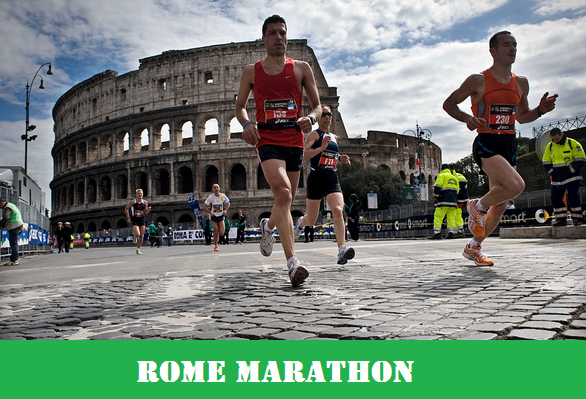 Name of the competition: Maratona di Roma or Rome Marathon

Where to start: The most popular Rome Marathon will outset from the Via dei Fori Imperiali which called as the shadow of the Coliseum. The run will be proceeded numbers of eminent places of the city as like Piazza di Spagna, the Pantheon, the Trevi Fountain, Piazza Venezia and  the Saint Peter’s. As all know Rome city is the city of Seven hills but the competition executed on the flat road to give the opportunity of a PB to all runners.

Rome Marathon is an archaic road racing run competition. The competition established in 1982 and continue  the journey since long years. Actually the competition started in long years ago but the modern marathon is totally different from the past format. Today’s Marathon is not the part of past Marathon and it kicked-off from 1995. This going to be the 22nd edition of modern marathon. Last season about fifty thousands of athletes take part in the competition where only 11487 athletes able to complete the task properly. This year a crowded amount of participants will be seemed at the route of the race. Abebe Negewo, an Ethiopian runner won the last title by finishing the task within 2:12:23 hrs. On the other hand the female contestant Meseret Kitata who was also an Ethiopian won the race within 2:30:25 hrs.

If you are interested in search of an ideal combination of athletic challenges as well as a great weekend of natural beauty, Rome Marathon become the perfect choice for it.  It’s really a fantastic place for run racing. The weather and the environment is damn good which easily touch anyone’s heart.