The Grand prix of America widely known as The Red Bull MotoGp (United States) which refers the motorcycle road racing competition in America’s Circuit. This season the competition returns with the new fact of motorbike racing on Austin, Texas in USA.  The competition has been taken place from 8th to 10th April along with practice session in Friday of the weekend. 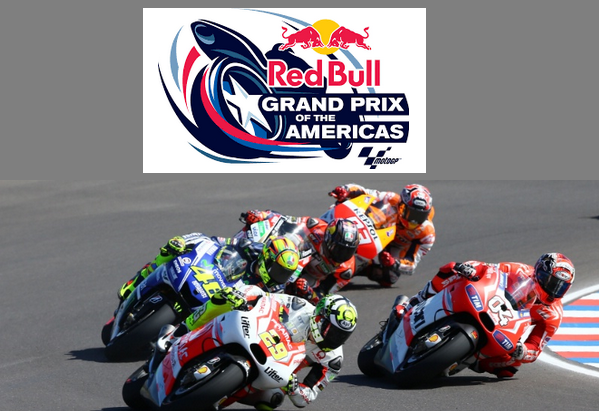 The competition started the journey in 2013 with the world famous motoGp champions as well as Marc Marquez, Valentino Rossi where the first title of 2013 was grabbed by Marquez. It going on the fourth approach on the Circuit of America for Red Bull Grand prix World Championship, since debut year 2013. The opening two rounds of the competition make us surprised with the unbelievable winning result of spanish professional racer Jorge Lorenzo who plays for Movistar Yamaha MotoGP. Undoubtedly Lorenzo is a world class road racer who grab the world MotoGp title for three times in 2010, 2012 and 2015. But the fans were exited to see Marc Marquez’s magic who recently won the Argentina grand prix.

Marc Marquez is one of the most talented bike racer in time being. Recently he won the Argentina grand Prix, 2016 which was his first victory of the year in Moto cycle Grand prix racing competition. The victory raised the record of winning 25th time grand prix. This spanish racer becomes one of the most favourite biker of the season.

Valentino Rossi also seemed damn good but it’s quite stiff to watch him performing at the corresponding eminence as he was seemed in last year. This multi MotoGP world Champion grab 86 victories in 500 cc race competition. MotoGP really a demotic and amazing motorcycle racing competition throughout the world.

The weekend racing competition Red Bull Grand Prix championship taken place on US Circuit Of Austin, Texas. The circuit consisted 5.513km track along with 120,000 fans capacity. The facility construction completed in 2012 ahead of the first season road racing in 2013. The circuit holds 20 major  turns along with 11 in left side and 9 in right side which seems much riskey. The world famous architect & circuit designer Hermann Tilke designed the format of the circuit.

It is called that MotoGP is one of the largest, fastest, loudest and  baddest motorcycle racing competition all over the world. MotoGP bikes which run in the MotoGp competition, are conducted full of  speedy machines. It’s an emerged, fire breathing and two hundred and forty horsepower featuring sporting event which is disputed by some crazy biker. The battle of Motorcycle race full of risk where the drivers always fight against the other competitor. Every year lots of drivers fall in injury. Despite of all unexpected event they don’t fly away from the competition. However the fans like it very much and the popularity of the event rapidly growing up.