MotoGP racing bikes which regarded as the most expensive bikes in the world which is also the dream bike for every bike lovers. But most of the persons does not know much about this bikes. They want to know the details of this speed monster along with the price. According to the different kinds of news portal, each bike would cost almost $2 million to $3 million which used to make only for the race but not for the business sale. But most of the youngster wants to be the owner of the bike and they always try to find its price details. 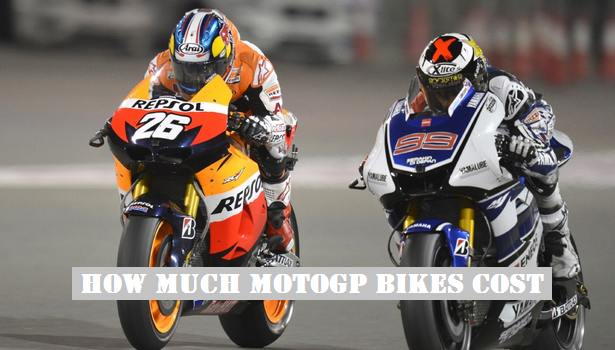 How much MotoGP Motorcycles cost

# Handmade: The motoGP racing motorcycle are almost custom made where the engine of the bike used to make individually which is only for racing. Besides, using the latest technology, this motorcycles are one of a kind. Each team possesses the different technology to make this motorcycles so powerful and the mechanic used to work very carefully to connect every parts.

# Scarce Parts: However, motoGP racing competition is the biggest two wheeler competition in the world where the fastest bikes used to compete with the best quality riders. These bikes are used to make by the very rare parts which cost too much. Like Honda CBR1000RR, the company manufactured most of the parts of the bike but sometimes, they get it from the third party named Ohlins. Ohlins are best for their suspension for the motoGP rides. Though, regular clients generally spend $3,000 to $15,000 to get latest front forks from Ohlins. However, the most rare and expensive parts of the bikes are engine which cost more than $100,000 for each bike but a Honda engine cost more than $220,000.

# Expensive Materials: Considering the general motorcycle, these are heavy weighted bikes but that is a problem for racing bikes to control. So, the motoGP motorcycles are made by the light materials which is much expensive. The team uses titanium, magnesium and carbon fiber to make the bike light instead of steel and plastics. Carbon fiber generally cost $10 a pound where plastics and steel are less than $1 a pound.

# Technology: The technology of the motoGP racing motorcycle are much surprising. The latest model parts are generally used for the bikes to make it very powerful. The technicians replaced spring valves with pneumatic valves. They also used almost 40 sensors for each bikes to monitor its perform and when the bike came up after the race or any practice session, the complete information are downloaded and later analyzed.

# Wear: MotoGP bikes are made for the competition only and not for the business sell and so, they do not need to make it for long lifespan. There are some items which used to last only couple of hours. Considering the normal bike tires, they are made for completely different way with the different elements which could last long. But racing tires which basically made by the stickier for well grip. They could keep away the bikes from sliding in the corners. This tires just have the short life time.

However, considering the above discussion, it completely understood that these motoGP motorcycle are very expensive and if the price range of the bike would be $2 million then no need to be surprised. But, according to these bikes manufacturer company, these $2 million cost are even not included of research and development. SO, if R & D would be added, the price tag will surely increase.