MotoGP racing competition is one of the talkative and most popular motorcycle road racing competition which popularity is getting heavier day by day. Every year, the season of motoGP used to be staged under the organization of FIM (Federation Internationale de Motocyclisme) since the inaugural season 1949. But currently, the commercial rights of the competition are owned by Dorna Sports. Though, this is the most popular and risky racing competition, so, there is a curiosity of everyone about the earning side of it. So, the question is how MotoGP competition generate money in every season and at the end of the season, how much their revenue and expenses. 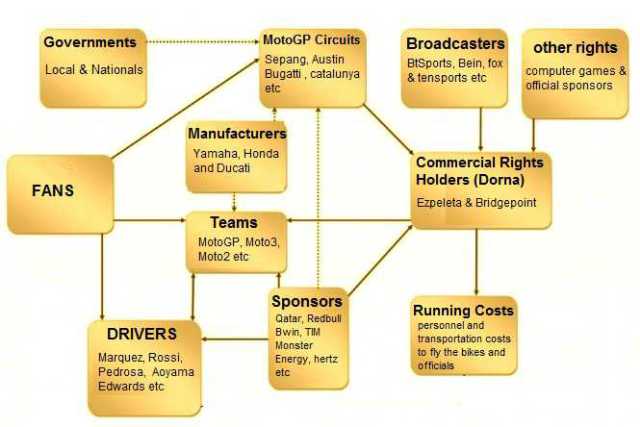 Now, here we present below some ways of generating revenue of this biggest road racing competition that would consider.

# Revenue: Now, here we discuss with the first point. According to the 1st point, a handsome amount of money used to receive by MotoGP from the circuit or promoter. Now, analyzing the information, to host a motoGP event would cost more than $4 million. Basically, it depends on circuits where some circuits used to pay more than $10 million to Dorna for hosting a Grand Prix in every calendar year. So, considering eighteen Grand Prix in every season which generally gives minimum $75 million in every year total.

2nd biggest revenue of MotoGP used to come from different kinds of TV rights where Dorna used to sell it throughout the world. Like, United Kingdom channels BT Sports generally gets the exclusive rights to broad this competition live in their territory and for this, they had to pay almost $70 to $90 million to Dorna to get that right. But the amount not for a single season but the agreement used to make for couple of years. So, like BT Sports, different kinds of networks around the world named beIN Sports, Ten Sports, SporTV, Sky Italia, Fox Sports and many of them generally make agreement with Dorna and pay a large amount of money. So, considering this facts, from this side, MotoGP used to get more than $100 million revenue every year.

According to the 3rd point, a huge amount of revenue generally earn from different sponsorship deal with many potential companies like Monster Energy, Tim, Bwin, Herts and so on and they used to pay a handsome amount for that. Some of them are long term partners of MotoGP and in every season from this Sponsorship deals, MotoGP receives more than $100 million.

According to the above discussion, one thing should be clear about the revenue of MotoGP racing competition but now here we talk about the expenses. Like huge revenue, in every season of MotoGP, Dorna has to spend a great amount of money. Here we discuss about some key expenditures below.

# Expenses: Dorna which is the current owner of the commercial sector of MotoGP used to spend a huge amount for producing global feed for the broadcasters. Besides, they also spend more than $10 million plus around $2 million for generating satellite bikes to MSMA. However, according to the some reliable sources, Dorna also spend more than $10 million plus around $50 million in every season for racing bikes transportation. And finally, they used to spend another handsome amount for riders prize money and travel allowances. Of course, the prize money depends on the riders performances.