Federation of International Motorcycling (FIM) presents Spanish motorcycle Grand Prix is a motorcycling road race sporting event which occurres at Circuito Permanente de Jerez in Andalucia in every calendar of year. The exoteric event has backed again in Europe this weekend. The three days race competition started with the practice session on 22nd April, where the final race will be taken place on Sunday, 24th April.

After first day race the spanish rider Marc Marquez, who representing Honda team, got the first place with 65 points, Where, with 43 points Jorge Lorenzo holding the second position as well as Valentino Rossi in third with 33 points. Along with BT sports 2 some more media network has been covering the full event throughout the world. The event also available in online. Here the full event in below. 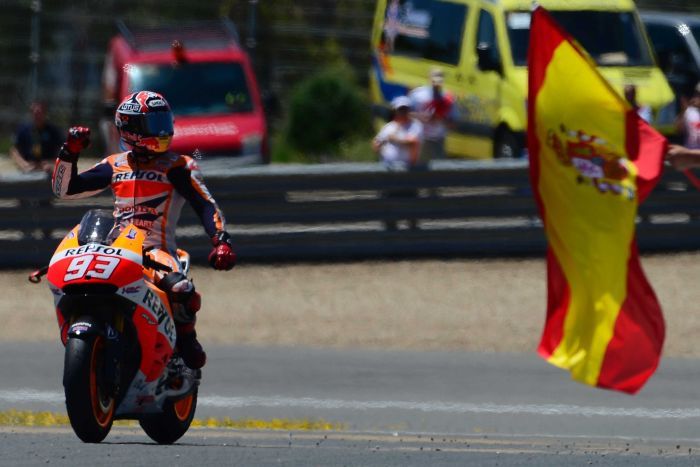 Standing after first full practice one and two:

This the standing table after Friday practice session, where we can see Yamaha’s Pol Espargaro in fourth place with 28 points and Dani Pedrosa in fifth place by holding 27 points on his name.

MotoGP 2016 has commenced with the Qatar Grand Prix which loudly won by Jorge Lorenzo, where the Spanish Marc Marquez was lead in both grand prix of  Argentina as well as Austin Texas. Now it’s time to the fourth grand prix of formula one over the year.

Top fifteen contestants are maximum belong to Spain Nation and there also present some Italian, british and German riders. Now the spotlight swings to defending champion Jorge Lorenzo who going to ride for Ducati from next season.

However the race still on and after Sunday we get the full result. So guys Keep watching and linked with us for update.

Let’s see the last year result at a glance.