Russia World Cup will be predicted by a cat! Do you remember astrology Octopus Paul? That was a lot of rage in 2010. The semi-final, the final of the championship, in almost every match of the match was answered by the German octopus. In the 2014 World Cup, there was no official orientation set, but sometimes the camels, sometimes elephants or even turtles have been seen predicting supporters.

Now Russia’s WC organizing authority officially determined a cat to predict. Russia’s famous museum, a white-colored cat living in St. Petersburg’s Hermitage Museum, will be predicted the name of winner in the WC championship. His name is named after the famous Greek character Achilles, ‘Achilles the Cat’. 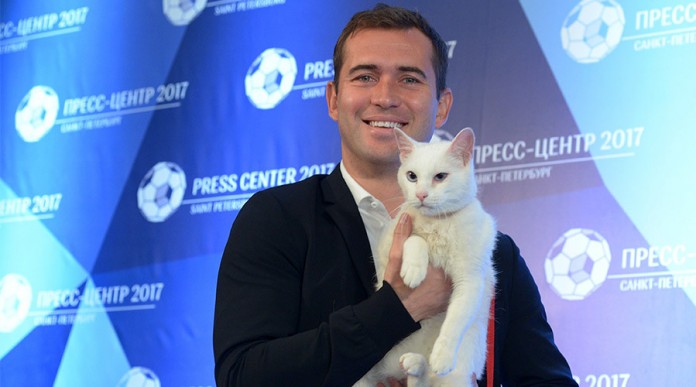 Although the white cats are deaf. But this astrology cat will say, who will be the champion of Russia World Cup. Which team will win in the same day match. Hermanus Cat Press Secretary Maria Khalatenen told the state-run news agency RIA Novosti that the decision has been taken and the paper has been signed. The main reason for choosing Achilles is his ability to sort and analyze any matter.

Achilles has great ability to predict future and it’s really amazing that every year animal predict the human game. If it is thinking how is it possible a animal who have no knowledge of any animal to augur. When it is World Cup football, it’s not a simple story. It’s a very big matter so far.

This is not the first time, Achilles predicted the FIFA Confederations Cup held in Russia last year. There were three out of four matches that perfected the prediction of the blue eyes pet. Blue eyes this cat chooses one from two balls filled with food. The balls and the names of the opponents of the two countries are written Achilles the two side. Which ball the cat chosen, that team being win the match. In the same way this season it will be chosen the winner country.

Interestingly, this Achilles will also be given a fan ID, passport. So that he can move freely in any stadium. Achilles can enter freely. Not only this, Achilles will be taken to the children’s hospital and the old age.

Normally cat being a cute pet of people. A big amount of people having such pet but this being a extraordinary pet which will use in the upcoming Russia championship, which will begin from 14th June. With the championship, it will be star of the earth.