After wrapping the La Liga trophy against Real Madrid last Saturday, Barcelona going to bet for Copa del Rey final on Sunday. The full team getting preparation for the grand finale event in Madrid. The source said that the Barca have backed to train themselves for the final event against Sevilla Football Club. It is also learnt by the source that the La Liga squad going to be parted on the final match without any changing and there are no injury info mentioned by the club.

According to the report the all star players as well as Lionel Messi, Luis Suarez and Neymar Jr get busy on the training. The Barca midfielder Arda Turan who is known as Catalan football giants also backed in the training session on last Wednesday for getting chance Copa del Rey final on tomorrow against Sevilla football club at Vicente Calderon stadium in Madrid. But the Coach mentioned that he has been doubted for the final event for a personal issues. 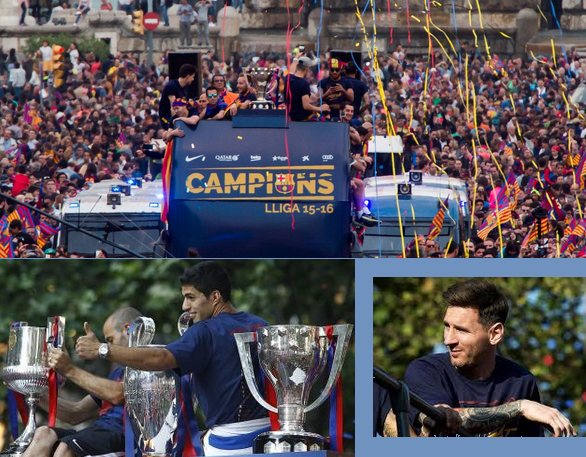 The German goalkeeper Marc-Andre ter Stegen likely select for the Copa Del final, if Claudio Bravo failed to take part on the event. The last weekend injury probably keep out the Chilean Goalkeeper from the game.

Barca striker Luis Suarez desperate to kick his 60th goal of the season on Sunday which help him to obtain Ballon d’or bid of the season. In La Liga final event, his terrific hat-trick boost the team to get the champion trophy. Now his target to snatch the Ballon d’Or title of the season. Suarez’s acquainted a great performances this season that was fabulous and prolific for team Barcelona. He has scored of 40 out of 137 shoot which parallely quite better than Real striker Cristiano Ronaldo who made 35 score on 224 shots. Suarez is ready to brutal the sixteenth goal of the season.

Barca who is the most successful club of the tournament and set for getting the trophy for 28th. They were gripped in final approach by Real Madrid and the credit goes to Luis Suarez who asking hat-trick and push the team holding the title. Barcelona became the defending champion of the competition who won last year’s title by beating Athletic Bilbao on 3-1 score.

On the other side Sevilla also prepared themselves as the CDR finalist. The both team had met in the Super Cup Championship at the starting of the season where they lost in 5-4 goals in extra time.

Obviously Barcelona became the more stronger than the Sevilla who have been successively won the twenty seven title and also grab the Champion League trophy last year. After La Liga the Barca hopeful for the Copa del Rey if they able to grab the title the celebration will be double in a year.

After winning the La Liga home fixtures now they are going to battle for CDR on 22nd May. Numbers of Sports network cast the live match throughout the world and the event is also available in online. So, guys get ready for the most happening match of the season and linked with us to get more update.