Argentina went straight to the World Cup after all the fears. The Barca star Lionel Messi push the team in the final tournament by doing hattrick. And Sampaoli team finally got the World Cup tickets so far.

In the final round of the South American region, trashing Ecuador by 3-1 goals Argentina keep their fortunes in their hand. But they have to play the play-off. But in the other match, Chile lost to Brazil and Colombia and Peru match were drawn. So getting third position in the point table Messi’s team straightly reached in the Russia World Cup.

Argentina were in the sixth position before the end by doing three draws. The impossible task was the responsibility of captain and the best player of the team Messi’s shoulder. The Barcelona forward also showed why he is called one of the best footballers in the world. 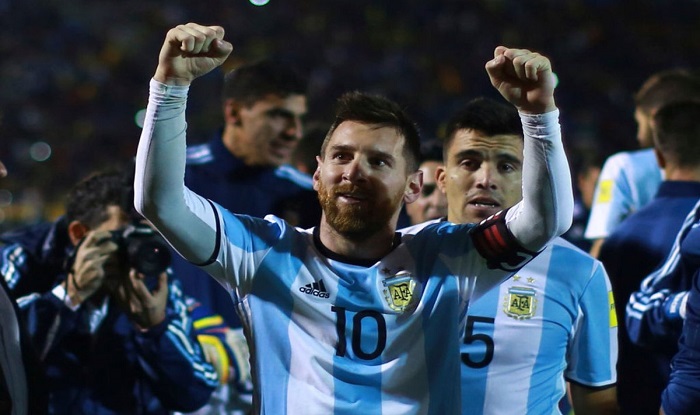 Only Messi’s ability the game return the equality. As soon as he did not celebrate, he picked up the ball from the net and thanked the Creator for giving him the ability. Because he knows that a lot of have to do in the next.

Eight minutes later, Messi made another goal which get one step ahead to the tam. The Maria’s extended ball could not be relieved by opponent’s players. Leo gets in the d-box and bounces two defender who is running away from the opponent and finally it was goal.

The Argentine has lost a great opportunity to increase the gap in the 32nd minute. The goalkeeper has stopped the Maria Shot from Messi’s extension.

After the break, the attackers repeatedly attacked the attackers and pressed the guests under pressure from Ecuador. But in the 62nd minute, he made a hat-trick to end all uncertainty.

The ball was dropped by the ball about 40 yards away. The magic of the feet and the strategy seemed very clearly. Another obstacle came forward to send the ball over the goalkeeper’s head and reached in the net.

Many said it was going to be Messi’s last international match the Argentine captain kept the reply as if it was for the match.

If you could win the match, it was sure that the play-off game was at least five points away from Argentina. However, Messi’s amazing craft lifted the team in the right position and secured their participation in the final tournament. It was 1970s, Argentina could not play for the last time in WC.